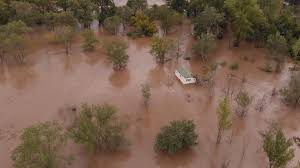 A house floats down the river after flash flooding occurred in the region, in Anduze, France September 19, 2020, in this still image taken from a video obtained from social media. Facebook/ Nature Cevenole - Photographies de Yannick Lecenes/via REUTERS

PARIS (Reuters) – Two people were missing in southern France on Sunday after flash floods caused by storms that dumped a year’s worth of rainfall in parts of the Cevennes hills north of Montpellier.

A 64-year-old nursing assistant swept away in her car remains unaccounted for, along with a man who went missing during a hill run in the Cevennes.

Emergency services have mobilized helicopters and 700 personnel to assist inhabitants hit by the flooding, which has also cut off road access, water and electricity supplies to some locations.

Interior Minister Gerard Darmanin, who travelled to the affected region on Sunday, said some 50 people had been rescued from the flood waters and another 420 given emergency shelter.