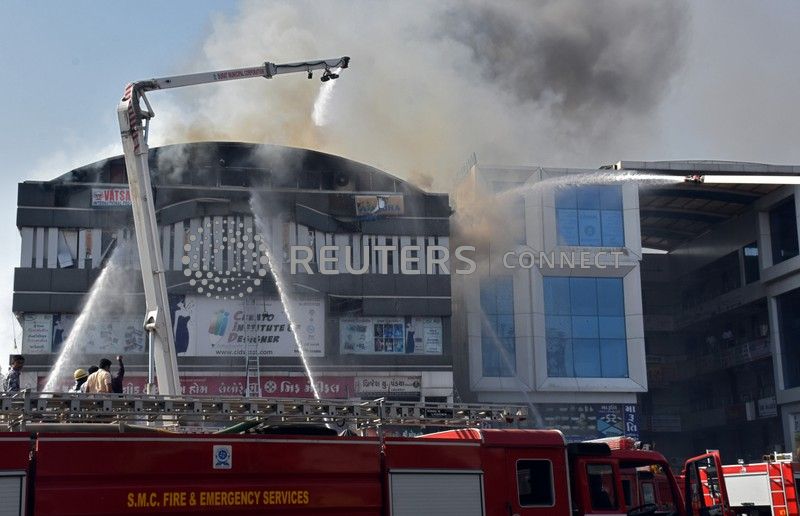 FILE PHOTO: Firefighters douse a fire that broke out in a four-story commercial building in Surat, in the western state of Gujarat, India, May 24, 2019. REUTERS/Stringer

MUMBAI (Reuters) – Indian authorities said on Sunday two fire department officials had been suspended over a fire at a coaching centre that killed 21 students and one teacher in the western Gujarat state, renewing questions about building safety standards.

Surat Commissioner of Police Satish Sharma said the owners of the Takshashila Arcade building, where the shoddy coaching centre was built on the four-storey building’s terrace, were absconding.

The coaching centre was made of combustible material like Styrofoam and tires were used as seats for students prepping for architecture or commerce exams, according to Sharma.

The manager of the coaching centre, Bhargav Bhutani, has been arrested.

“We are examining … whether any proper permission was taken for construction. And, if permissions were not given, who was responsible for this,” Sharma told Reuters, adding preliminary investigations suggest a short-circuit caused the blaze.

Pareek, who said he was not aware of the precise reason behind their suspensions, added that a fire brigade was on site within minutes though it took roughly 15 minutes for a hydraulic platform to arrive because there are only three of them in Surat.

An official at the Surat Municipal Corporation said no one was available for comment on the suspensions of the fire officials.

Television footage showed students desperately trying to escape by jumping off the building as smoke billowed from the top floor.

Footage also showed a man, identified by the Indian Express as 22 year-old Ketan Chodvadiya, perched on the facade of the burning building helping children jump down.

“When I reached there, I saw smoke and fire. Around 300 people had gathered there but the fire brigade was yet to arrive,” Chodvadiya told the Indian Express.

Chodvadiya, who said he was used to scaling buildings to escape his father’s 10:30 pm curfew, used a ladder to pull down students, estimating he had helped save up to 10 of them.

“One student fell down. I couldn’t catch her,” he said

“I could see her lying dead and I can’t forget the sight. I will always regret that I couldn’t save her.”