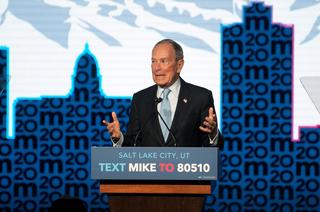 The Wall Street Journal reported that these organizers in California receive $2,500 a month to promote Bloomberg’s candidacy through actions such as posting on social media to their own networks.

“We took enforcement action on about 70 accounts, which includes a combination of permanent suspensions and account challenges to verify ownership,” a Twitter spokeswoman said in a statement to Reuters.

The action was first reported by the Los Angeles Times.