Twenty migrants arrested after riots in fire-hit centre in Bosnia 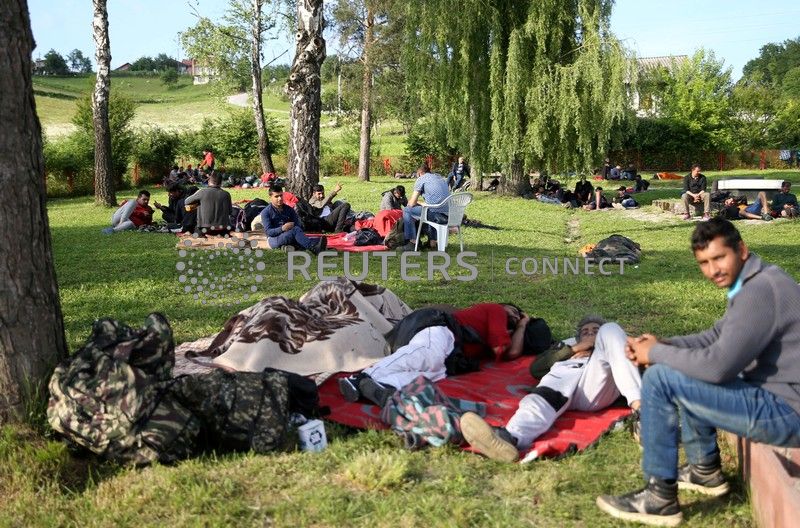 FILE PHOTO: Migrants rest in a park after their accommodations in a migrant reception centre was destroyed by fire in Velika Kladusa, Bosnia, June 1, 2019. REUTERS/Dado Ruvic/File Photo

When police arrived at the Miral centre to quell the disturbance involving at least 100 migrants, they were pelted with stones, metal bars and bottles, and three officers were injured, regional police spokesman Ale Siljdedic said.

A dozen migrants at the centre, used for accommodation for up to 700 people, were also injured and taken to hospitals in Velika Kladusa and Bihac for treatment.

Siljdedic said tensions in the centre had been running high after a fire last weekend that torched the building’s top floor and forced many migrants to sleep outdoors.

About 25,000 migrants from Asia and North Africa entered the impoverished Balkan country from Serbia and Montenegro in 2018, and a further 6,000 have arrived so far this year, according to Bosnia’s security agencies.

Only around 3,500 have been accommodated in transit centres, leaving thousands sleeping rough in the open as Bosnia lacks the resources to care for most of them.

Many of the migrants would like to get to countries in the European Union with strong economies, but the EU’s external borders – starting with Croatia north of Bosnia – have generally been closed to them since an influx of over one million in 2015.