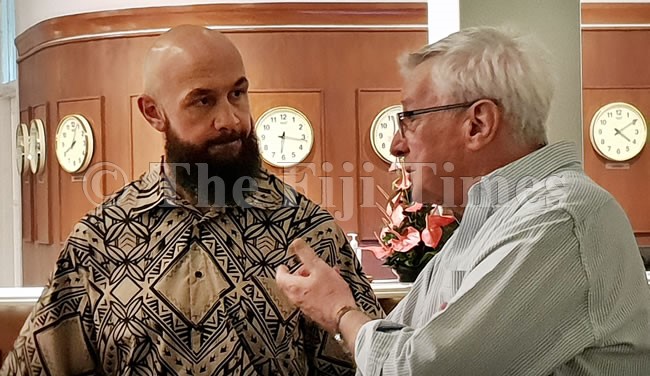 Forbes is in the country and was the chief guest at the Lifeline Fiji Charity Gala Event held at the Grand Pacific Hotel(GPH) on Saturday in Suva.

With two tournaments left to play in London and Paris, Fiji sits in second place with 142 points and trail series leaders USA by three points. Forbes said looking back at the previous tournaments, Tuwai was a key force and after his injury , the rest of the team stood up.

“Sevens mostly revolves around the playmakers but we all know that Fiji from one to 13 players could be a threat and they are always exciting to watch,” Forbes said.

“The HSBC World Rugby Sevens Series has been an exciting one over the last four to five years now. You can see the rise of USA and everyone has put a lot emphasis this year for Olympic qualification and if they see the opportunity to qualify, that is one of the main objectives for the top four teams.”

He said after what had happened at the Singapore Sevens in April, the Fiji team would need a few things to go their way in order for the USA to trip up.

He added whichever four teams finished in the top four would be probably going into the off-season feeling easier knowing they had qualified for the Olympics in Tokyo next year.

He said the competition during the world series was getting tougher and tougher every time.

“This is why it is an Olympic sport because so many countries can compete rather than a sport dominated by three or four countries,” he said.

“We all know that 10 or more countries could win a world series and let alone a Sevens World Cup and Commonwealth Games or Olympic Games.

“I think a lot of teams that are performing are consistently good but because of the format and the way sevens is played and on any day, any country can win.

“Unfortunately, the NZ sevens team won the Commonwealth Games and the Sevens World Cup but across the world series they have not been consistent as we expected. I guess that this is the beauty of sevens at the moment.”