Tuvalu ‘rises’ above the waves 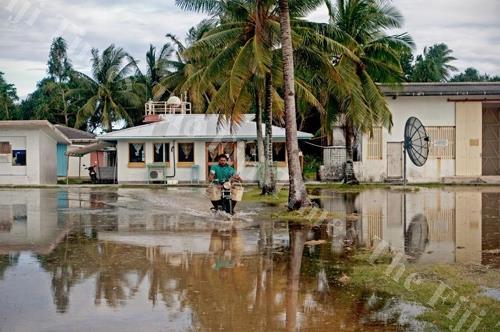 Flooding during king tides is a problem on Fongafale when water percolating up through the coral matrix laps even at the door of the meteorological office. Picture: SUPPLIED

TUVALU, the Pacific nation long seen as a prime candidate to disappear as climate change forces up sea levels is actually growing in size. A University of Auckland study by Professor Paul Kench and co-researcher Dr Murray Ford examined changes in the geography of Tuvalu’s nine atolls and 101 reef islands between 1971 and 2014, using aerial photographs and satellite imagery.

They found the total landmass of Tuvalu of 26 square kilometres, which is just bigger than Auckland’s Rangitoto Island, had a net increase of 2.9 per cent during the period of study, 40 years. This represented 73 hectares (180 acres) of land increase, despite competing sea-level rise rates of over 3.5 mm per year simultaneously.

This peer-reviewed scientific study published recently, flies in the face of sensationalised rhetoric for over a decade by Enele Sopoaga, Prime Minister of Tuvalu, about 965 kilometres north of Fiji. In December 2014 he asked fellow world leaders at the United Nations climate summit in Lima, Peru: “If you were faced with the threat of the disappearance of your nation, what would you do?”

It’s a question that leaders of Pacific Island states have been asking for decades. As a warming climate drives sea levels upward, low-lying island nations face an uncertain future or no future at all; say these leaders, warning of their nations’ imminent disappearance.

“I carry a huge burden and responsibility,” Mr Sopoaga told the climate summit delegates in Peru. “It keeps me awake at night. Will we survive? Or will we disappear under the sea?”

These are sensational and emotive questions thrown in to get media headlines. But how real is the threat? Are island nations like Tuvalu, where most of the land is barely above sea level, destined to sink beneath the waves?

To gain international attention to climate concerns and motivate funding to respond to what is described as climate damage, some political leaders are predicting dire consequences, often without scientific research and evidence. Statements of island leaders at international meetings and the recent scientific research findings, as is the case here, are totally at odds. Does it matter?

Exaggeration, whatever its impetus, inevitably invites backlash, which is bad because it can prevent the nation from getting the right kind of help. If we want to grab headlines, the “disappearing islands” theme is good. But to find solutions to, for example, the increasing number of ocean inundations that are occurring requires well thought-out plans.

Co-author Prof Kench said the research, published in the journal Nature Communications challenged the assumption that low-lying island nations would be swamped as the sea rose.

“We tend to think of Pacific atolls as static landforms that will simply be inundated as sea levels rise, but there is growing evidence these islands are geologically dynamic and are constantly changing,” he said.

“The study findings may seem counter-intuitive, given that (the) sea level has been rising in the region over the past half century, but the dominant mode of change over that time on Tuvalu has been expansion, not erosion.”

The authors argue the study should prompt a rethink on how Pacific island nations vulnerable to sea-level rise in the future, should respond. Rather than accepting their homes are doomed and looking to migrate to countries such as Fiji, Australia and New Zealand, the researchers say they should start planning for a long-term future.

“On the basis of this research we project a markedly different trajectory for Tuvalu’s islands over the next century than is commonly envisaged,” Prof Kench said.

“While we recognise that habitability rests on a number of factors, loss of land is unlikely to be a factor in forcing depopulation of Tuvalu.” The authors said island nations needed to find creative solutions to adapt to climate change that take into account their homeland’s evolving geography.

“However, as the data on island change shows there is time (decades) to confront these challenges.”

Together, these studies show sea level alone is not the main factor that controls the formation and subsequent change of reef islands. These processes also depend on the surrounding coral reef generating sufficient sand and shingle to build islands.

Low-lying islands are built by the action of waves and currents, which deposit sand and gravel on the shore. Just like any beach, as wave and current processes change, island sand and shingle are mobilised and deposited elsewhere on the shoreline. Their results suggest islands can grow upwards when waves wash over them during storms or tsunami, depositing sand in the process.

One example is Funafuti Atoll in Tuvalu, where their study found that most of these islands either remained stable in size or grew larger over the past few decades, in spite of rising sea levels. Another of their studies found that islands in Nadikdik Atoll, Marshall Islands have been rebuilt over the past century despite being destroyed by a typhoon in 1905.

The formation of coral islands was a topic of considerable scientific argument in the 19th century. The question that particularly bothered scientists was this: since corals grow only at shallow depths in the sea (rarely below 80 metres), how is it that coral rock, formed from their remains, often extends for hundreds of metres beneath the sea?

In 1842 Charles Darwin, who visited the Pacific in 1835-6, put forward the theory that coral islands had been built on slowly subsiding volcanic rocks. As the volcanic foundation sank, it carried the dead coral to greater depths. Meanwhile, new deposits of coral were being added to the top near the surface, so that the upward growth kept pace with the subsidence.

At some later date another volcanic movement occurred, and pushed some of the coral up to form islands. Darwin thus postulated that a solid mass of coral rock could be found above the surface of the sea, and extend from there, through the waters in which it had been formed down to depths at which the coral had never lived.

After many years of discussion on the structures of atolls, the Royal Society of London decided to bore down into the coral and obtain a sample of it from far beneath the surface to see if these samples would contain traces of shallow water organisms.

In 1896 an expedition was sent to Tuvalu (Funafuti) which managed to bore to a depth of 33 metres. In 1897 another party of scientists led by Professor Edgeworth David of the University of Sydney carried the boring to a depth of 200 metres while the following year a third group managed to obtain a sample from a depth of 340 metres.

All the samples obtained were found to contain traces of shallow water organisms, but the drilling was never able to reach the volcanic base of Funafuti. Another attempt was made in 1911, which was also unsuccessful. The boreholes can still be seen to this day, at the site now called David’s Drill. Mrs David, the wife of Prof David, wrote a book describing her experiences in Funafuti. It was published in 1899 and called Funafuti, Or Three Months on a Coral Island.

Thus, we note in this article, that reef islands are able to grow under current climatic conditions, suggesting coral islands are very dynamic landforms adjusting their shape and position on reef surfaces over decades.

On the face of it, this is potentially good news for Pacific communities. It should thus be noted that the islands that we call “home” may be less vulnerable than is commonly thought by our climate change activists and politicians.

* Dr Sushil K Sharma BA MA MEng RMIT) PhD (Melbourne) is a WMO accredited Class 1 professional meteorologist and is a professor of meteorology at the Fiji National University. The views expressed are the author’s and not of the FNU or this newspaper.