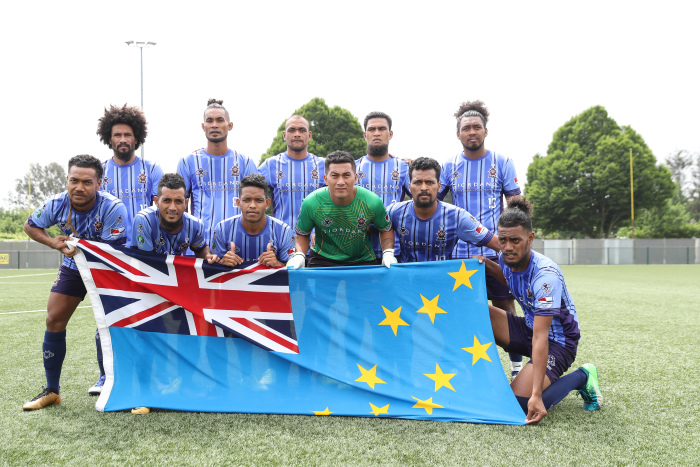 Tuvalu posing ahead of their game against Szekely Land Picture: Con Chronis

FUNAFUTI – Football in Oceania speaks to Tuvalu Islands Football Association (TIFA) President Soseala Tinilau about the CONIFA World Football Cup and the dream of joining FIFA, which is still alive and kicking.

Tuvalu took part in the Confederation for Independent Football Associations (CONIFA) World Football Cup for the first time, after Kiribati had to withdraw from the tournament.

The group stage proved to be a tough affair. After falling to a 4-0 loss to Szekely Land on the opening day, the second game saw the islanders get beaten heavily by pre-tournament favourites Padania 8-0. On the third and final group stage match day Tuvalu were up against Matabeleland and despite fighting bravely and scoring their first goal of the tournament, they ended up 3-1 losers.

In the first game in the placement rounds, Tuvalu were beaten by a strong and solid United Koreans in Japan team by 6-1, setting up a match against Tamil Eelam in the following round.

It all looked comfortable with Tuvalu leading 3-1 going into the added time of the match but a stunning comeback from Tamil Eelam, including a last-touch-of-the-ball-winner, saw them lose 4-3.

That meant that Tuvalu would play the final match to decide who would finish 15th or 16th, but due to the withdrawal of the Ellan Vannin team, that match would instead be won on forfeit and a friendly with the Chagos Islands would be played in its place.

That finally gave Tuvalu a long-awaited victory as the Chagos team was dispatched comfortably with 6-1. A very good way to end the tournament for the Tuvalu boys.

Despite not getting the results they wanted in the Paddy Power CONIFA World Football Cup, TIFA President Soseala Tinilau was pleased with the tournament.

“We are very happy because we ended up winning the last game of the tournament. We are preparing for the Pacific Games in Samoa, so this is a very good learning experience for them. I said to them “as long as you learn something from this, that’s all we want”, we are working towards that [Pacific Games],” Tinilau told Football in Oceania.

All of Tuvalu’s matches were played on artificial grass pitches and that proved a challenge for the team, who were used to the bumpy natural grass surface at the Tuvalu Sports Ground. For many, it was the first time even touching an astroturf pitch.

“Back home we play on natural grass, here is an artificial one. It’s my first time to step on one, it’s so soft,” Tinilau explained before the match against Tamil Eelam.

“You can see when the ball bounce, it dies out completely. It’s quite an experience for them [the players]. Now they are getting the feel of it and they are acclimatizing to it.”

And of course, Football in Oceania had to ask the question most people who care about the state of football in Tuvalu wants to be answered. How is the process of becoming a FIFA member going?

“We still want to lodge another bid again to become a FIFA member. There are only two criteria’s that we can’t meet: The first is a stadium of 3000 capacity, we can’t do that, and numbers of hotels. FIFA will ask us to host a tournament like this [the CONIFA World Football Cup], so we need enough rooms for all the players.”

Tinilau hopes that Tuvalu can do what Gibraltar does in Europe, let their home games be hosted outside of the country:

“I think the way forward is to work together with our Pacific neighbours, especially Fiji. If they can allow us to use Fiji as host ground for us, that would be really good. Hopefully, we can resubmit again to them and they can vote on that and see how we can go forward on that. That’s the only way forward.”

The lack of money is the big stumbling block for the tiny island country, but Tinilau has a creative solution, if only FIFA will be willing to help out a little:

“FIFA has a lot of money, so why not give it to us, we build the stadium, they monitor us and if we meet their criteria, we can become members. We don’t have money, we rely on the government. At the moment we are trying to upgrade our playing field back home and I also suggested an artificial surface for the new one, so I think maybe next year we will have a new playing ground. Hopefully, it will meet the criteria they are looking at.”

Perhaps FIFA membership is closer than it has been in a long time, or maybe Tuvalu will be seen again at the next CONIFA World Football Cup in 2020?…