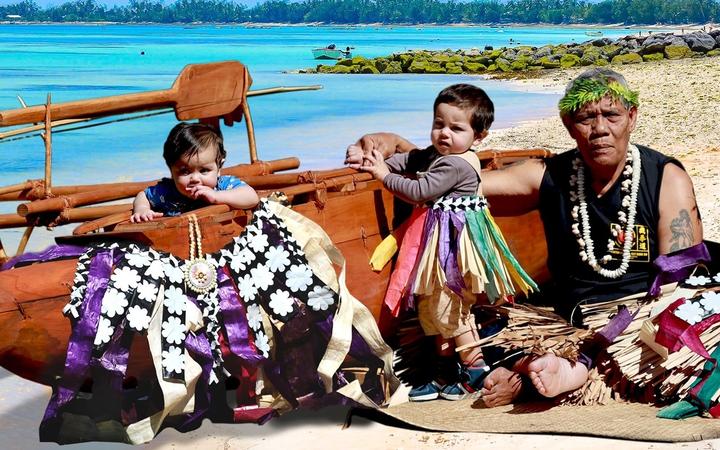 Vaito Keakea with his mokopuna Photo: Ministry of Pacific Peoples

The theme of New Zealand’s Tuvalu Language Week is a call to resilience according to the Minister for Pacific Peoples, Aupito William Sio.

There were also remarks by various dignitaries including Minister Aupito and the Tuvalu High Commissioner Paulson Panapa.

Aupito said the week’s theme of ‘Fakatili Te Kiloga Fou’ or ‘navigating the changing environment’ fitted the current climate as it pertained to Covid-19.

But he also said it was a reminder of the threats of climate change to the nation of Tuvalu.

The minister urged Tuvaluans to be strong, resilient and future-focussed as they navigated the dual challenges of the pandemic and the climate.

The week is the sixth of nine official Pacific Language celebrations promoted by the Ministry of Pacific Peoples.

It is the fifth time Tuvalu has been included in the initiative with language learning, history, traditional dancing and arts and crafts events being held across the nation this week, although many would be digitally hosted.

Aupito said Pasifika had already shown their adaptability in marking the weeks through such new and unique ways. He said the new normal would include a fusion of tradition and modern methods of celebration.

The minister said the Tuvalu community in Aotearoa had been proactive in establishing digital platforms to connect and support their community online.

“They have confidently embraced the use of new technology to share their language and culture while also growing their reach of engagement with their community across Aotearoa and with families back in the islands.”

He said digital communication had also been critical in efforts to stamp out Covid-19.

“While Covid-19 is foremost in our minds, Tuvaluan communities in New Zealand are also more keenly aware than most of us of the impact climate change continues to have on their island home and the future survival of their heritage and language.

“Tuvaluans have made their voices heard loud and clear on climate change. They have taken their message to the United Nations and have played a leading role in awakening the world on the need to address climate change, not just to save Tuvalu, but to save the world.”

Aupito praised Tuvalu’s courage and said New Zealand would support the people of Tuvalu to ensure their country had the infrastructure and resources to strengthen their resilience to adapt and pursue mitigation measures against climate change.

Tuvalu will also celebrate its 42nd year of independence on 1 October.