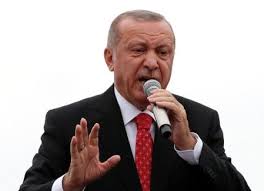 ISTANBUL (Reuters) – Turkish President Tayyip Erdogan’s ruling party is struggling to win over Istanbul’s Kurdish voters, a group it considers a key constituency in the electoral battle for control of Istanbul, despite softening its polarizing rhetoric.

Erdogan’s Islamist-rooted AK Party (AKP) has been targeting Kurdish voters in the hopes of securing victory in a re-run of a mayoral election in the city on Sunday. But the efforts – which include adopting a more conciliatory stance than in the run up to the March election – are falling flat due to doubts about the party’s sincerity, according to voters, Kurdish politicians, and pollsters.

The main opposition Republican People’s Party’s (CHP) won the mayoral vote in Istanbul on March 31 – a stinging setback for the president and his party, which had long-controlled the city. They now have a second chance after election authorities annulled the first vote following AKP complaints of election irregularities.

A loss on June 23 for AKP’s mayoral candidate Binali Yildirim, who was hand-picked by Erdogan, would serve as a further embarrassment for the president after March’s defeat. It would also deal a symbolic blow to his power as Turkey battles recession, jockeys in war-torn Syria, and balances its U.S. and Russian ties.

Istanbul is Turkey’s largest city – accounting for nearly a fifth of Turkey’s population of 82 million – with a budget of about $4 billion.

Party officials say they believe the strategy is having a positive impact, including drawing support from conservative Kurds who had voted for the party in the past but stayed home in March.

Kurdish voters account for about 15% of the roughly 10.5 million eligible voters in Istanbul. They mostly support the pro-Kurdish Peoples’ Democratic Party (HDP) or the centre-right AKP, which attracts conservative Kurdish voters.

The AKP received a potential major boost late on Thursday when state-owned Anadolu news agency reported that jailed Kurdish militant leader Abdullah Ocalan had called on the HDP to be “neutral” in the election, implying they should abstain.[L8N23R5YS]

However, there was no immediate reaction from the HDP to the report and Ocalan’s lawyers said they would issue a statement on Friday.

CHP’s mayoral candidate Ekrem Imamoglu received some 13,000 more votes than AKP’s Binali Yildirim – marking the first time in 25 years that AKP or its predecessor had lost control of the city.

The loss triggered a re-calibration of the AKP’s election strategy after Erdogan’s polarizing campaigning in March was judged to have backfired and alienated Kurdish voters.

According to AKP officials and insiders, the party is targeting the 1.7 million voters who stayed home on March 31, particularly conservative Kurds and AKP supporters looking for more focus on fixing the country’s stalled economy.

“Kurds will have a big impact on the result of this election,” said a source close to AKP. “Of course, if we can secure a contribution from the Kurds, if there is a rise in their votes, it will make a seriously positive contribution.”

At a rally days before the March 31 vote, Erdogan called out a pro-Kurdish opposition leader and said: “If you want to live in Kurdistan, there is a Kurdistan in northern Iraq. Take all the terror lovers with you, clear off and live there.”

But two months later, that rhetoric is absent ahead of the re-run. Instead the party has focused on a “softer messages towards Kurds and a more moderate stance are helping,” according to a source close to the AKP.

A softer stance was on display earlier this month when the AKP’s Istanbul candidate, Binali Yildirim, visited Diyarbakir in the mainly Kurdish southeast. He greeted a crowd in Kurdish and spoke of Kurdistan being represented in Turkey’s first parliament, established by modern Turkey’s founder Mustafa Kemal Ataturk in 1920.

Yildirim’s gesture coincided with easing tensions in the southeast as jailed militant leader Ocalan was allowed to meet his lawyers for the first time since 2011 and brought an end to a hunger strike by his supporters.

The lifting of the years-long ban on lawyers visiting Ocalan was seen as an overture towards the Kurds. AKP has also brought some Kurdish community leaders from the southeast to build support in small gatherings, according to people close to the pro-Kurdish Peoples’ Democratic Party (HDP).

But polling suggests the change in tack is having limited impact. A voter survey conducted by Turkish pollster Konda last weekend put the main opposition’s candidate Imamoglu in the lead with 54 percent, and AKP’s Yildirim on 45 percent. A survey by another pollster for the AKP in May put Imamoglu three percentage points ahead.

After a televised debate between the two candidates on Sunday, pollster Mehmet Ali Kulat, owner of polling firm Mak Danismanlik, said Imamoglu was slightly ahead of his rival in a survey of 30,000 city residents.

Hakan Bayrakci, head of polling firm Sonar Arastirma, said he expected HDP voters who did not vote in the previous election to come out in support for the CHP on June 23.

The pro-Kurdish HDP has come out more solidly in support of the main opposition’s candidate, Imamoglu, dismissing Yildirim’s speaking in Kurdish and referencing Kurdistan as a “cheap” election ploy.

“You deny the Kurdish people’s language, culture and identity. But when the elections get close, you say Kurdistan and speak Kurdish,” HDP co-leader Pervin Buldan told a rally in Istanbul’s Esenyurt district on Saturday.

“Who are you kidding? Kurds won’t vote for you,” she said.

Selahattin Demirtas, the former HDP leader jailed since 2016 on terror-related charges, issued a series of tweets on Tuesday to galvanize his party’s supporters behind Imamoglu. “Because together we are great. Nothing will be great enough without the HDP,” Demirtas wrote, echoing Imamoglu’s campaign slogan “everything will be great.”

In Esenyurt, a district with a relatively high Kurdish population and where HDP won 22% of the vote in last year’s parliamentary election, Reuters interviewed more than a dozen voters, none of whom indicated a change in their voting intention, despite the change in campaigning tone.

Tuncay Ulu, a 62-year-old Kurd, said he had voted for the main opposition party’s mayoral candidate, Imamoglu, in March and planned to do the same this weekend, saying the AKP’s overtures would not win Kurdish votes over.

“This is trickery, they treat people like herds. It has no impact because people know what they are doing,” he said.

But, civil engineer Cemal Ankay voiced opposition to Imamoglu, questioning his appreciation for the HDP support.

“He is ungrateful,” the 39-year-old said, complaining that Imamoglu went to the Black Sea region rather than the southeast during campaigning. “He is acting as if he did not get support from the Kurds,” he said, adding he would vote for Yildirim.