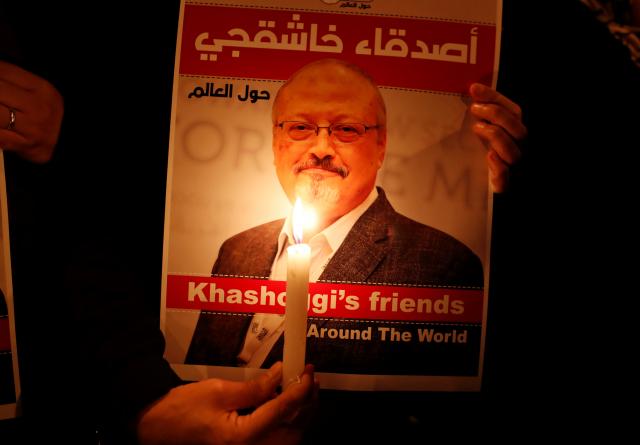 A demonstrator holds a poster with a picture of Saudi journalist Jamal Khashoggi outside the Saudi Arabia consulate in Istanbul, Turkey October 25, 2018. REUTERS/Osman Orsal

ISTANBUL (Reuters) – A senior Turkish official proposed on Wednesday that suspects in the killing of Saudi journalist Jamal Khashoggi be tried in a Turkish court observed by international human rights groups.

Khashoggi, a critic of de facto Saudi ruler Prince Mohammed bin Salman, was killed in Saudi Arabia’s Istanbul consulate last month in a hit which Erdogan says was ordered at the “highest levels” of the Saudi government.

Turkish authorities have prepared an extradition request for 18 suspects detained in Saudi Arabia, which includes a 15-man team that Turkey says arrived in Istanbul shortly before the killing and carried it out.

“Let the human rights units from all respected organisations, from the United Nations to the European Union, come and watch this trial,” said Omer Celik, spokesman for President Tayyip Erdogan’s AK Party.

“Let them judge whether the trial fits the standards of international law,” Celik, a former minister, told a news conference.

Turkey says the suspects should be tried in a Turkish court because the crime occurred on its territory, even though it was inside a Saudi diplomatic mission. Riyadh has said the suspects will be prosecuted in Saudi Arabia.

Khashoggi’s killing has provoked global outrage but little concrete action by world powers against Saudi Arabia, the world’s largest oil exporter and a supporter of Washington’s plans to contain Iranian influence across the Middle East.

Turkey has several audio recordings including the killing itself and conversations prior to the operation which Turkey subsequently uncovered, two sources with knowledge of the issue have told Reuters.

French Foreign Minister Jean-Yves Le Drian on Monday questioned remarks by Erdogan that Turkey had given the recordings to Germany, France and Britain. “He has a political game to play in these circumstances,” Le Drian said, when asked if Erdogan was lying. [nL8N1XN4M4]

Celik condemned Le Drian’s response and questioned why the countries of the European Union did not produce a common response to the killing.

“Rather than finding out who gave the order for this massacre, everyone is starting to evaluate what position to take in the next stage regarding the interests of their own country,” Celik said. “This is an extremely problematic situation.”

A senior French diplomat later said Le Drian was neither confirming nor denying whether French officials had listened to recordings.

Germany has pledged to suspend arms exports to Saudi Arabia until the killing is explained, and has called for a common European response regarding arms sales to the Kingdom. [nL8N1X70QS]