Turkey rejects U.S. ultimatums, says will not back down on Russia deal 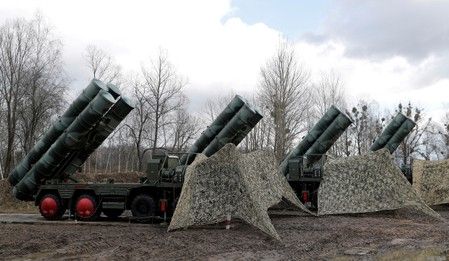 FILE PHOTO: A view shows a new S-400 "Triumph" surface-to-air missile system after its deployment at a military base outside the town of Gvardeysk near Kaliningrad, Russia March 11, 2019. REUTERS/Vitaly Nevar/File Photo - RC1BFE102410

ANKARA (Reuters) – Turkey will not back down from its decision to buy Russian S-400 missile defense systems despite U.S. warnings that it will lead to Ankara’s exclusion from the F-35 fighter jet program, Foreign Minister Mevlut Cavusoglu said on Thursday.

In what has become the main source of tension between Ankara and Washington, the NATO allies have sparred publicly for months over Turkey’s purchase of the S-400s, which Washington has said could trigger U.S. sanctions.

U.S. Acting Secretary of Defense Patrick Shanahan last week sent his Turkish counterpart a letter warning that Ankara would be pulled out of the F-35 jet program unless it changes course from its plans to install the defenses.

In what was Turkey’s first direct response to the letter, Cavusoglu said no one can give Turkey ultimatums.

“Turkey will not back down from its decisions with these kinds of letters,” he said. “Turkey bought S-400, it is going to be delivered and stationed in Turkey.”

The S-400s are not compatible with NATO’s defense systems and Washington says they would compromise its F-35s, which Turkey also plans to buy. Turkey has proposed that the allies form a working group to asses the impact of the S-400s, but has yet to receive a response from the United States.

Cavusoglu on Thursday repeated Turkey’s call for the joint working group, saying experts from both countries should come together to evaluate U.S. concerns.

A day earlier, President Tayyip Erdogan said that Turkey had completed the deal with Russia and that the systems will be delivered in July. Russia has said it will begin the delivery of the systems in July.

Erdogan also said that Ankara would challenge its potential removal from the F-35 program on every platform and hold those who exclude Turkey accountable.

Speaking after a cabinet meeting in Ankara, Presidential Spokesman Ibrahim Kalin said he hoped the F-35 issue would not escalate to an international issue, and added that Turkey would receive the jets.

“The F-35s, which are Turkey’s right, will most certainly be delivered to our country,” Kalin said. “We hope that the United States will turn back from this stance that permanently damages bilateral ties by using the S-400s as an excuse as soon as possible,” he said.

Kalin also said a meeting between Erdogan and Russia’s President Vladimir Putin was being planned at the G20 summit in Japan, where Erdogan is also expected to meet with U.S. President Donald Trump.

The United States has threatened to impose sanctions on Ankara under its Countering America’s Adversaries Through Sanctions Act (CAATSA), the possibility of which has spooked investors and caused a selloff in the lira this year.

The currency slid more than 1% against the dollar on Thursday.

While Turkey has dismissed the U.S. warnings, Washington has said discussions are taking place with Ankara on selling Turkey rival Raytheon Co Patriot defense systems. But, Erdogan has said the U.S. offer was not “as good as the S-400s”.

Defense Minister Hulusi Akar has said Turkey is working on a response to Shanahan’s letter and that it will be delivered in coming days.

The ministers later spoke by telephone on Thursday and discussed the letter, Turkey’s defense ministry said, adding that Akar had “emphasized the improper wording not in line with the spirit of the Alliance” in the letter during the call.

Kalin on Thursday reiterated that Shanahan’s letter to Akar was not in spirit of the alliance between the NATO allies, and added that he had discussed the issue with Trump’s national security advisor John Bolton.

Israel’s deputy Defense Minister Eli Ben-Dahan said the strains between Turkey and the United States could help strengthen ties with Israel and boost the country’s participation in the F-35 program.

“It could also very much be that.. the State of Israel will get another portion within the framework of the F-35 and additional things which, in part, were meant to have been transferred to factories in Turkey,” he told Army Radio.