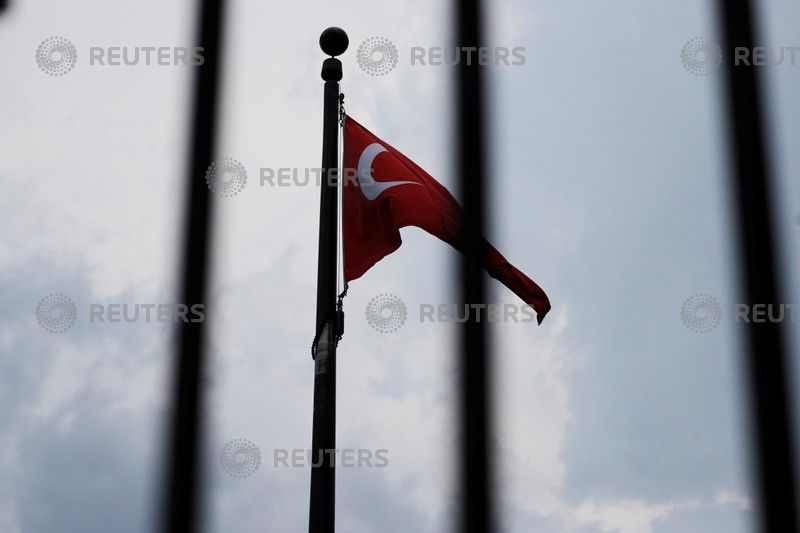 The Turkish flag flies at the Embassy of Turkey in Washington, U.S., August 6, 2018. REUTERS/Brian Snyder

The orders marked an escalation of what has been a steady stream of raids against alleged supporters of preacher Fethullah Gulen since the coup attempt in July 2016, in which 250 people were killed. Gulen, a former ally of President Tayyip Erdogan, has denied any involvement with the putsch.

Since the coup attempt more than 77,000 people have been jailed pending trial, and widespread arrests are still routine. Authorities have suspended or sacked 150,000 civil servants and military personnel.

Erdogan said on Thursday that Turkey would start new initiatives abroad to target the financing of Gulen supporters.

The Istanbul chief prosecutor’s office sought the arrest of 219 soldiers on active service, including four colonels, five lieutenant colonels and 10 majors, state-owned Anadolu news agency said. Over half of the suspects were sergeants, it said.

The operation was based on investigations into pay phone communications between alleged Gulen network members, it added.

On the orders of the Istanbul chief prosecutor, an operation was launched at 1 a.m. (2200 GMT) to seize the suspects, the Hurriyet newspaper website reported.

Another 48 people were facing arrest in an inquiry by Ankara prosecutors targeting mostly defence industry company personnel who were suspected of supporting Gulen, Anadolu said. This investigation was also related to pay phone communications.

It was not clear how many people had so far been detained in the two operations.

Turkey’s Western allies have criticised the crackdown, which was pursued mainly under a state of emergency that was declared after the coup and remained in effect until July this year.

Erdogan’s critics accuse him of using the failed putsch as a pretext to quash dissent. Turkish authorities say the measures are necessary to combat threats to national security.

Defence Minister Hulusi Akar, the former chief of staff, told parliament last month more than 15,000 military personnel had been dismissed since the July 2016 putsch, including 150 generals and admirals.

Turkish authorities have taken control of hundreds of firms accused of links to Gulen and his supporters, and shut down more than 130 media outlets as part of the purges.