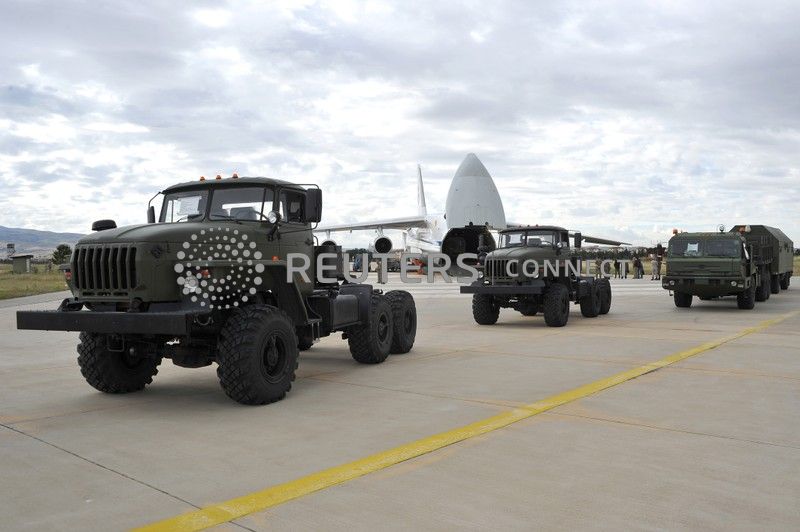 First parts of a Russian S-400 missile defense system are seen after unloaded from a Russian plane at Murted Airport, known as Akinci Air Base, near Ankara, Turkey, July 12, 2019. Turkish Military/Turkish Defence Ministry/Handout via REUTERS

ISTANBUL/WASHINGTON (Reuters) – Turkey began taking delivery of an advanced Russian missile defence system on Friday, a move expected to trigger U.S. sanctions against a NATO ally and drive a wedge into the heart of the Western military alliance.

The first parts of the S-400 air defence system were flown to the Murted military air base northwest of Ankara, the Turkish Defence Ministry said, sealing Turkey’s deal with Russia which Washington had struggled for months to prevent.

Reaction from Washington, which has threatened to impose sanctions on Turkey, was limited, with acting Defence Secretary Mark Esper saying the U.S. position has not changed.

President Donald Trump gave a 30-minute speech on trade on Friday afternoon at a plant in Milwaukee run by a subsidiary of defence contractor Lockheed Martin but made no mention of Turkey.

Washington has opposed Turkey’s purchase, saying Russian military hardware is not compatible with NATO systems and that the acquisition may lead to Turkey’s expulsion from an F-35 fighter jet programme.

Investors in Turkey have been unsettled by the deal. The Turkish lira <TRYTOM=D3> weakened as much as 1.6% to 5.7780 against the dollar, before recovering somewhat, after the ministry announced the arrival of the S-400 consignment. The main Istanbul share index <.XU100> fell 2.13%.

A second delivery by air will take place soon, Russia’s TASS news agency quoted an unnamed military-diplomatic source as saying. A third delivery – of 120 guided missiles – will be carried out by ship at the end of the summer, the source said.

“We are aware of Turkey taking delivery of the S-400, our position regarding the F-35 has not changed,” Esper told reporters earlier in the day and said there will be “more to follow” after he spoke with his Turkish counterpart.

But the Pentagon then cancelled a planned news briefing on Turkey.

“Minister Akar told his U.S. counterpart that Turkey remains under a serious air and missile threat and that purchase of S-400 defence systems was not an option but rather a necessity,” the Turkish defence ministry said about the phone call, adding that Ankara was still assessing acquiring U.S. Patriot missiles.

Turkey says the system is a strategic defence requirement, particularly to secure its southern borders with Syria and Iraq. It says that when it made the deal with Russia for the S-400s, the United States and Europe had not presented a viable alternative.

President Tayyip Erdogan said after meeting President Donald Trump at a G20 summit last month that the United States did not plan to impose sanctions on Ankara for buying the S-400s.

Trump said Turkey had not been treated fairly but did not rule out sanctions, and U.S. officials said last week the administration still plans to act.

There has been bipartisan opposition in the U.S. Congress to Turkey’s purchase and the reaction from lawmakers have been more stern, calling the State Department and Pentagon to remove Turkey from the F-35 program. “President Erdogan was given a very clear choice. Unfortunately, he has clearly made the wrong one,” a statement from House of Representatives Foreign Affairs Committee said.

Under legislation known as Countering America’s Adversaries through Sanctions Act (CAATSA), which targets purchases of military equipment from Russia, Trump should select five of 12 possible measures.

These range from banning visas and denying access to the U.S.-based Export-Import Bank, to the harsher options of blocking transactions with the U.S. financial system and denying export licences.

Washington says the S-400s could compromise its Lockheed Martin <LMT.N> F-35 stealth fighter jets, an aircraft Turkey is helping to build and planning to buy.

Turkey could also face expulsion from the F-35 programme under the sanctions. Erdogan has dismissed that possibility, but Washington has already started the process of removing Turkey from the programme, halting training of Turkish pilots in the United States on the aircraft.

Investors in Turkey have been concerned about the impact of potential U.S. sanctions on an economy which fell into recession after a currency crisis last year.

Turkey’s dollar bonds dropped to three-week lows on the news of the delivery, while the cost of insuring exposure to Turkish sovereign debt also rose.

Fitch ratings downgraded Turkey’s sovereign rating to ‘BB-‘ on Friday and said it remained vulnerable to deterioration of ties with the U.S. and added that while any U.S. sanctions on Turkey might have minimal direct economic effect, warned that their impact on sentiment could be significant.

The S-400 acquisition is one of several issues which have frayed ties between the two allies, including a dispute over strategy in Syria east of the Euphrates River, where the United States is allied with Kurdish forces that Turkey views as foes.

The detention of U.S. consular staff in Turkey has also strained relations, along with disagreements over Iran, Venezuela and Middle East policy. Turkey has long demanded Washington hand over a Muslim cleric who Ankara holds responsible for an attempted coup in 2016.