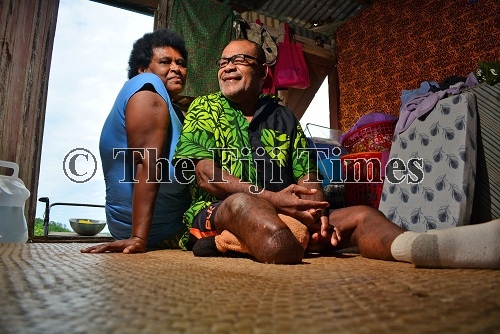 A 63-year-old amputee who was carried by his cousin to safety when Tropical Cyclone Harold barrelled into Kadavu on April 8, says they were saved by the grace of God.

Jacoro Tukani was sheltering in an empty house at Nabukelevu-i-ra Village when powerful winds from the Category 4 storm tore off its roof.

His cousin, Tika Saqalevu carried him and tucked him under the floor for safety.

“I told all my family members to leave me behind and go and find a safer place to seek shelter because I would slow them down,” he said.

“It was hard for them to leave me behind but I had faith in God, I knew he would protect me.” Mr Tukani said when the raging winds peeled off the roof, Mr Saqalevu did not think twice, he lifted the amputee and together they sheltered under the floorboards until the winds died down.

“If it wasn’t for him, the beam of the house would have fallen on me and the roofing iron sheets that were flying all over the place could have hit me.

“I thank God for saving me from that monstrous cyclone.”