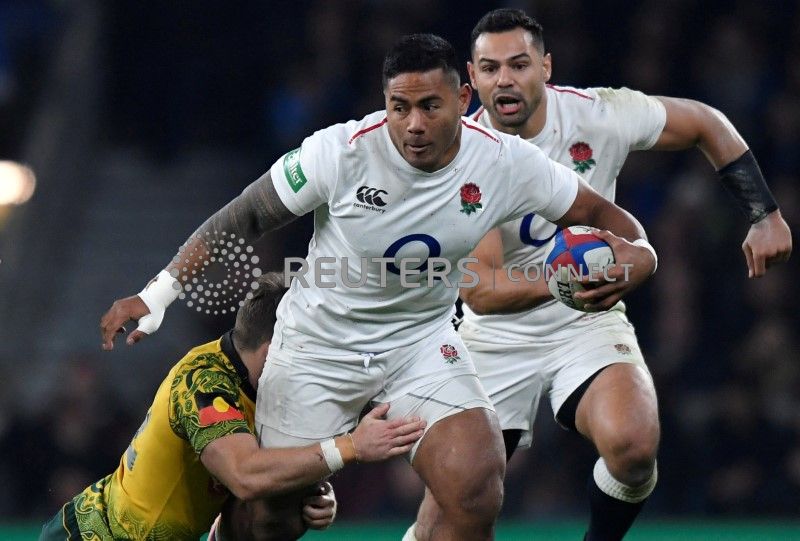 LONDON (Reuters) – Manu Tuilagi will make his first England start for five years after being named at inside centre for Saturday’s Six Nations opener in Ireland, where Elliot Daly retains the fullback jersey and Jack Nowell and Jonny May will fill the wings.

Coach Eddie Jones named his squad at England’s Portugal training base on Thursday and it looks a formidable one with very few injury absences for what should be a monumental clash with last year’s Grand Slam champions.

There had been speculation that Mike Brown could be recalled at fullback to deal with Ireland’s aerial threat, but Jones kept faith with Daly and has Chris Ashton on the bench as back-three cover. Brown did not make the match squad.

Henry Slade lines up outside Tuilagi, who is back playing regularly for Leicester after years of injury woes. His last start for England came against New Zealand in June, 2014 and he made brief replacement appearances in 2016 and last November.

In the absence of the injured Ben Te’o, Tuilagi offers the powerful ball-carrying option that dovetails with Slade’s more subtle approach.

“We could have moved Owen Farrell to 12 but I felt for this game the best option was to play Owen at 10 and Manu as a like-for-like replacement for Ben,” Jones said in a statement. “Manu has impressed us at the training camp, and is right to play.”

The power options are further boosted by the return of prop Mako Vuniopola and his brother and number eight Billy, back after missing the November series through injury, while Tom Curry (openside) and Mark Wilson (blindside) complete the back row.

Both are making their Six Nations debut as Curry, 20, wins his sixth cap having won four of his previous five against South Africa.

Uncapped scrumhalf Dan Robson is on the bench, with Ben Youngs starting.

England, who finished fifth in last year’s Six Nations, have lost their last two games against the Irish and have not won in Dublin since 2013.

“I think it is quite clear to beat Ireland you have to beat them in the contest area,” Jones said. “They are very good at the breakdown and in the air. Both those areas are a priority for us.

“Traditionally, England and Ireland games are always very close, tough affairs. There is a lot of emotion in the games so our ability to finish the game strongly is going to be vital.”

The championship gets underway in Paris on Friday when France play Wales. Scotland face Italy on Saturday.