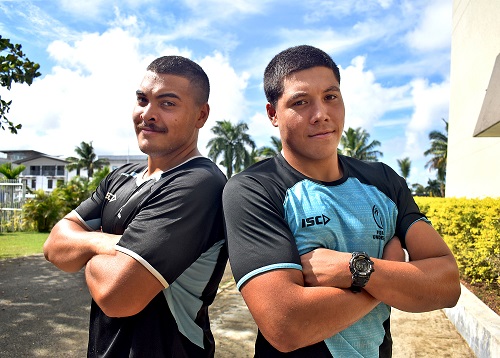 Brothers in arms ... Luke, left, and Waisea Tudulu after the Fiji U20 team training session at the Vodafone Arena in Laucala Bay, Suva on Wednesday, June 15, 2022. Picture: JONACANI LALAKOBAU

The brotherly love of the Tudulu siblings — Luke and Waisea — will be something they will play for when they wear the Fiji U20 rugby jersey next month.

They hail from Bau in Tailevu but were raised in Australia.

The brothers were named by head coach Iferemi Rawaqa for the Oceania Rugby Under-20 Championship on the Sunshine Coast Stadium in Australia from July 1–10.

“Obviously sometimes we don’t agree with each other.

“We put our shoulders on to each other, but this is just the reminder that we’re here to play rugby and play to a high standard. And we’re always pushing each other which is always good.”

The duo both play in the forwards, with Luke at loosehead prop and Waisea at flanker.

The tournament will be their debut in the international arena.

Luke, 20, said he started playing rugby as an eight-year-old in Australia.

“For me and my brother, we must thank Fiji rugby for the opportunity to come over here and try for the U20 team.”

He said the training was of very high intensity.

“It’s a very tight-knit group of boys that we’re going to be a dominant pack in Australia against New Zealand and Argentina.

“I feel like we can win the Oceania Cup and bring it back to Fiji.

“And obviously that unpredictability in the Fijian players is something that we’re going to use to our advantage and be able to hold our set pieces as well in the scrums and line-outs.”