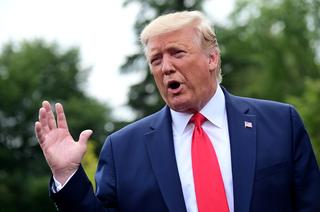 (Reuters) – President Donald Trump’s concern the United States could open its doors to “very bad drug dealers” by easing immigration rules for the storm-hit Bahamas is undercut by administration data showing the Caribbean plays a small role in the narcotics trade.

The era of the 1980s “Cocaine Cowboys,” who used speedboats to ferry vast amounts of that drug into South Florida from the Caribbean, has long since passed in large part because of the cooperation between the United States and nations including the Bahamas.

The U.S. Drug Enforcement Agency’s most recent assessment of drug trafficking mentions the Bahamas only once in its more than 150 pages, and indeed raises concerns about more potent marijuana flowing from the continental United States to the Caribbean.

“There are an extremely small number of people in the Bahamas involved in the level of criminality Trump was talking about, particularly drug trafficking,” said Charles Katz, an Arizona State University criminology professor who has worked extensively in the Caribbean, including advising nations on how to fight crime.

Several Bahamians who lost their jobs or homes to the storm said they were considering moving to the United States temporarily to find work. A bipartisan group of lawmakers including U.S. Senators Marco Rubio and Rick Scott of Florida, members of Trump’s Republican Party, called on the White House to temporarily relax visa requirements.

Trump, who has made restricting illegal and legal immigration a top policy priority, showed little enthusiasm for that idea when asked about it on Monday by reporters.

Those concerns belied the fact that the U.S. State Department’s annual International Narcotics Control Strategy Report, filed to Congress in March, widely praised the Bahamas for its fight against the drug trade. It said the Bahamas is not a significant drug-producing country but that it remains a significant transshipment point for illicit drugs bound for the United States.

“During 2018, there was a notable increase in communication, effectiveness, and cooperation between Bahamian law enforcement agencies and the United States,” the report read. “Demand for cocaine within the country remains low.”