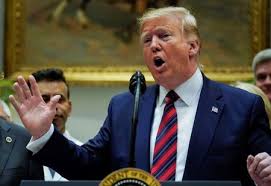 FILE PHOTO - U.S. President Donald Trump responds to questions from reporters after an event centered on a proposal to end surprise medical billing in the Roosevelt Room at the White House in Washington, U.S., May 9, 2019. REUTERS/Jonathan Ernst

WASHINGTON (Reuters) – U.S. President Donald Trump on Thursday urged Iran’s leadership to sit down and talk with him about giving up Tehran’s nuclear program and said he could not rule out a military confrontation given the heightened tensions between the two countries. At an impromptu news conference at the White House, Trump declined to […]