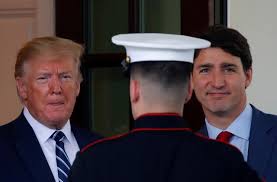 WASHINGTON (Reuters) – U.S. President Donald Trump and Canadian Prime Minister Justin Trudeau ordered officials on Thursday to develop a plan for U.S.-Canada collaboration on “critical minerals,” the White House said in a statement after a meeting of the two leaders.

Washington has grown concerned about its dependence on imports of rare earth minerals from China after Beijing suggested using them as leverage in their trade war.

Rare earths, a group of 17 elements that appear in low concentrations in the ground, are used in a wide variety of products ranging from lasers and military equipment to magnets found in consumer electronics.