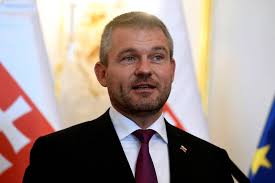 WASHINGTON (Reuters) – U.S. President Donald Trump will discuss security cooperation and other issues with Slovak Prime Minister Peter Pellegrini in Washington on May 3, the White House said on Friday.

It said “recent, positive gains in bilateral security cooperation as well as our shared concerns on cyber threats and the importance of energy security” would be discussed at the White House meeting.

Trump has pressed other NATO countries to increase their defense spending beyond the 2 percent level prescribed by the U.S.-led alliance.