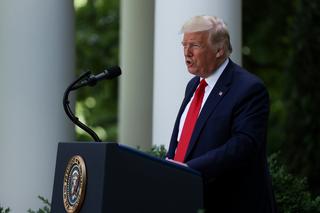 WASHINGTON (Reuters) – U.S. President Donald Trump on Wednesday threatened to regulate or shut down social media companies for stifling conservative voices, a day after Twitter attached a warning to some of his tweets prompting readers to fact check the president’s claims.

Without offering evidence, Trump again accused such platforms of bias, tweeting: “Republicans feel that Social Media Platforms totally silence conservatives voices. We will strongly regulate, or close them down, before we can ever allow this to happen.”

The president, a heavy user of Twitter with more than 80 million followers, added: “Clean up your act, NOW!!!!”

Trump’s threat to shut down platforms like Twitter Inc and Facebook was his strongest yet within a broader conservative backlash against Big Tech. Shares of both companies fell.

Twitter for the first time attached fact-check labels on Trump tweets after he made unsubstantiated claims on Tuesday about mail-in voting. In a pair of early morning posts on Wednesday, the Republican president again blasted mail-in ballots. Trump falsely claims that mail-in ballots lead to vote fraud and ineligible voters getting ballots.

Twitter and Facebook declined comment on Trump’s tweets. Asked during Twitter’s annual meeting on Wednesday why the company decided to affix the label to Trump’s mail-in ballot tweets, General Counsel Sean Edgett said decisions about handling misinformation are made as a group.

“We have a group and committee of folks who take a look at these things and make decisions on what’s getting a lot of visibility and traction…,” he said.

In recent years Twitter has tightened its policies amid criticism that its hands-off approach allowed fake accounts and misinformation to thrive.

Tech companies have been accused of anti-competitive practices and violating user privacy. Apple, Google, Facebook and Amazon face antitrust probes by federal and state authorities and a U.S. congressional panel.

The Internet Association, which includes Twitter and Facebook among its members, said online platforms do not have a political bias and they offer “more people a chance to be heard than at any point in history.”