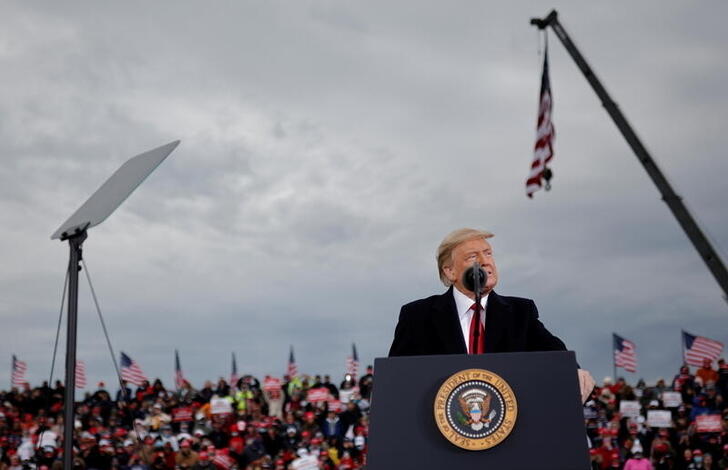 MUSKEGON, Mich./WILMINGTON, Del. (Reuters) – U.S. President Donald Trump took his re-election push to Michigan on Saturday despite rising coronavirus cases there, part of a swing through states he won in 2016 that polls show are supporting Democratic rival Joe Biden this year.

Trump held a large outdoor rally in Muskegon, where supporters did not maintain social distance. Some wore masks and some did not.

Biden, a former vice president, has hammered Trump for his response to the coronavirus pandemic, which has killed more than 219,000 people in the United States, the highest death toll in the world.

Trump sought to turn that criticism around on Saturday by saying, falsely, that his rival would impede the recovery from the outbreak.

“Biden will shut down the country, delay the vaccine and prolong the pandemic,” Trump said.

In a statement, Biden said he planned to unite the country to fight the virus if he wins.

“All President Trump is offering the people of Michigan is more lies and distractions — no plan to get the virus under control, no strategy for pulling our economy out of this recession, no vision for uniting the country,” he said.

Trump’s advisers have long seen Michigan and Wisconsin, as well as Pennsylvania, as key to his chances of re-election. The president is also playing defense in traditional Republican strongholds, including Arizona, where he plans to campaign on Monday, and Georgia, where he campaigned on Friday night.