Trump says he will nominate deputy to be new U.S. energy secretary 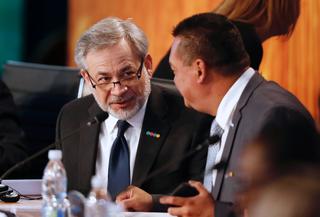 “I am pleased to nominate Deputy Secretary Dan Brouillette to be the new Secretary of Energy,” Trump wrote in a post on Twitter. “Dan’s experience in the sector is unparalleled. A total professional, I have no doubt that Dan will do a great job!”

If confirmed by the Senate, Brouillette will replace Rick Perry, who said on Thursday he would step down by the end of the year.

Brouillette, 57, has taken on increasing responsibilities at the Energy Department in recent months as Perry signaled he would resign. He went on international trips for the department and sat in for Perry during several Cabinet meetings.

Brouillette was vice president at Ford (F.N) from 2004 to 2006. After that, he headed public policy for United Service Automobile Association (USAA) which offers insurance and financial services to veterans.

A native of Louisiana, he was a member of the state’s Mineral and Energy Board from 2013 to 2016. Before that he served at the Energy Department as an assistant secretary for congressional and intergovernmental affairs for two years under former President George W. Bush.