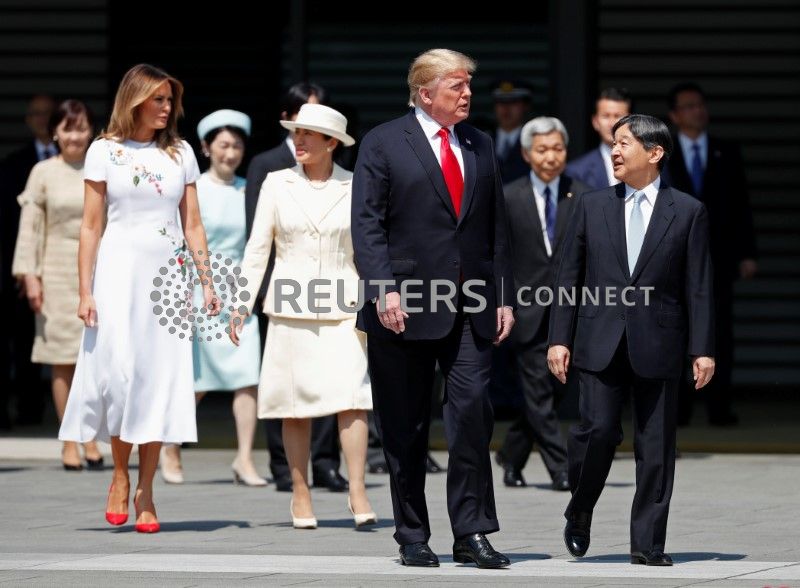 U.S. President Donald Trump and first lady Melania Trump are escorted by Japan's Emperor Naruhito and Empress Masako during an welcome ceremony at the Imperial Palace in Tokyo, Japan May 27, 2019. REUTERS/Issei Kato

TOKYO (Reuters) – U.S. President Donald Trump kept up pressure on Japan to cut its trade surplus with America, saying ahead of a summit with Prime Minister Shinzo Abe that he expected some announcements, probably in August, with the trade gap straightened out rapidly.

Trump added that he expected “good things” to emerge from his push to get North Korea to denuclearize, while adding that he “could be wrong”.

Monday’s talks with Abe are part of a four-day state visit that was big on pomp and circumstance meant to showcase the alliance but overshadowed by trade tensions.

“Trade-wise, I think we’ll be announcing some things, probably in August that will be very good for both countries,” Trump said. “We’ll get the balance of trade, I think, straightened out rapidly.”

Abe, who has developed close personal ties with Trump since the U.S. leader came to office, stressed the closeness of ties.

“I am determined to demonstrate at home and abroad the very strong bond” he said of the alliance in Japan’s new Reiwa era, which began on May 1, when Emperor Naruhito inherited the throne.

Earlier, Trump was greeted by Naruhito and his Harvard-educated wife at the imperial palace in Tokyo in a formal welcome ceremony broadcast live on national television.

He became the first foreign dignitary to be received by the monarch since inheriting the throne after his father, Akihito, stepped down in the first abdication by a Japanese emperor in two centuries.

Trump gave a slight bow and he and First Lady Melania Trump shook hands with the imperial pair before entering the palace, to be met by Abe and his wife, Akie, among others.

The president and emperor and their wives returned outside to walk a red carpet and stand under a hot sun while a military band played the national anthems of both countries.

Trump then walked the red carpet again, waving at assembled school children and inspecting Japanese troops before a military band played a formal salute as he stood solemnly on a raised platform.

Trump has made clear he was pleased to have been given the honour of the first reception with the emperor, who is holding a lavish state dinner later on Monday for the U.S. leader and his wife.

The two leaders have put on a show of friendship but have policy disagreements over trade and North Korea.

Trump has threatened to target Japanese automakers with high tariffs in his effort to cut trade surpluses with other countries that he sees as a sign that the United States has been mistreated.

Tokyo and Washington are working on a two-way trade pact but Trump has said he does not expect major progress on it until July, when Abe’s ruling bloc faces an election for parliament’s upper house.

Trump has spearheaded an expensive trade dispute with China. That trade war between the world’s two largest economies has hurt markets worldwide and confounded U.S. allies, including Japan and the European Union.

Such allies share U.S. concerns about Chinese practices but object to Trump’s tactics of threatening tariffs on their products rather than seeking cooperation in standing up to Beijing.

Abe and Trump are also set to discuss North Korea and Iran. Trump said on Sunday he was not worried about a recent missile launch by North Korea.

Also on Monday, Trump will meet families of Japanese citizens abducted by Pyongyang decades ago to help train spies.