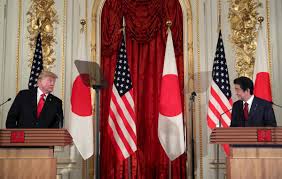 TOKYO (Reuters) – U.S. President Donald Trump pressed Japanese Prime Minister Shinzo Abe on Monday to even out a trade imbalance with the United States and said he was happy with how things were going with North Korea despite its recent missile and rocket launches.

Trump told a news conference with Abe after their summit that he wanted U.S. exports to be put on a fair footing in Japan through the removal of trade barriers. He said he hoped to have more to announce on trade very soon and said he and Abe had agreed to expand cooperation in human space exploration.

“We have an unbelievably large imbalance, as you know, trade imbalance with Japan for many, many years, Japan having the big advantage,” Trump said.

“They are brilliant business people, brilliant negotiators, and put us in a very tough spot. But I think we will have a deal with Japan,” he added.

Abe, for his part, said the two leaders had agreed to accelerate trade talks but dodged a question about timing.

Trump, who is on a four-day state visit to Japan meant to showcase the Japan-U.S. alliance, said on Twitter on Sunday that he expected big moves on trade would wait until after Japan’s upper house election in July.

“Trade-wise, I think we’ll be announcing some things, probably in August, that will be very good for both countries,” Trump said on Monday at the start of the talks. “We’ll get the balance of trade, I think, straightened out rapidly.”

Deputy Chief Cabinet Secretary Yasutoshi Nishimura told reporters there was no agreement to reach a trade deal by August.

Abe, who has developed a warm relationship with Trump since the U.S. leader came to office, stressed the closeness of ties.

“This visit of President Trump and Madame Trump is a golden opportunity to clearly show the unshakable bond to the whole world and inside Japan as well,” Abe told the news conference.

Earlier, Trump was greeted by Emperor Naruhito and his Harvard-educated wife at the imperial palace in a formal welcome ceremony.

Trump is the first foreign dignitary to be received by the monarch since Naruhito inherited the throne after his father, Akihito, stepped down on April 30, the first abdication by a Japanese emperor in two centuries.

Emperor Naruhito and his wife Empress Masako hosted a six-course state dinner later on Monday for Trump and his wife, Melania, and dozens of guests, many of whom were dressed in tuxedos or colorful kimonos.

In his toast, Naruhito highlighted how Japan forged a treaty with the United States when it emerged in 1854 from more than 200 years of self-imposed isolation.

“Since then, our two nations and peoples have overcome various hardships to cultivate mutual understanding and trust to become extremely close Pacific neighbors bound by a strong friendship,” he said.

On Sunday, Trump spent what he said was “an incredible evening” watching the Japanese national sport of sumo – where nearly naked wrestlers grapple on a raised sand ring – after he and Abe had bonded over hamburgers and golf.

While Abe and Trump have put their friendship on show, Trump has threatened to target Japanese automakers with high tariffs.

He has also spearheaded an expensive trade dispute with China. The trade war between the world’s two largest economies has hurt markets worldwide.

Trump told the news conference that Washington was not ready to make a deal with Beijing but he expected one in the future.

“I believe that we will have a very good deal with China sometime in the future. Because I don’t believe that China can continue to pay these really hundreds of billions of dollars in tariffs,” he said.

“You know businesses are leaving China, by the hundreds, by the thousands, and going into areas that are not tariffed.”

Chinese Foreign Ministry spokesman Lu Kang told reporters in Beijing that China’s stance was consistent: Disputes should be resolved through negotiations and China-U.S. consultations “must be based on mutual respect, equality and mutual benefit”.

Trump and Abe also have disagreements over North Korea.

Trump expressed optimism over prospects that North Korea would give up its nuclear program, and repeated that he was not bothered by recent missile tests, which he indicated he did not believe flouted United Nations Security Council resolutions.

“My people think it could have been a violation, as you know. I view it differently – I view it as a man, perhaps he wants to get attention. Perhaps not. Who knows? It doesn’t matter. All I know is that there have been no nuclear tests, no ballistic missiles going out, no long-range missiles going out. And I think that someday we’ll have a deal,” Trump said.

Trump also said he agreed with Kim that former U.S. Vice President Joe Biden, who has been critical of North Korea and is now campaigning to become the Democratic Party candidate for the 2020 U.S. presidential election, was a “low IQ individual”.

The two leaders also discussed Iran. Japanese media has said Abe was considering a trip there next month, to try to soothe rising tension between Iran and the United States.

Trump said he thought a deal with Iran on its nuclear program was possible and said he was not seeking regime change there.

Also on Monday, Trump met families of Japanese citizens kidnapped by North Korea and told the relatives that he would work with Abe to bring the abductees home.

In 2002, North Korea admitted its agents had kidnapped 13 Japanese decades ago. Japan says 17 of its citizens were abducted, five of whom were repatriated.