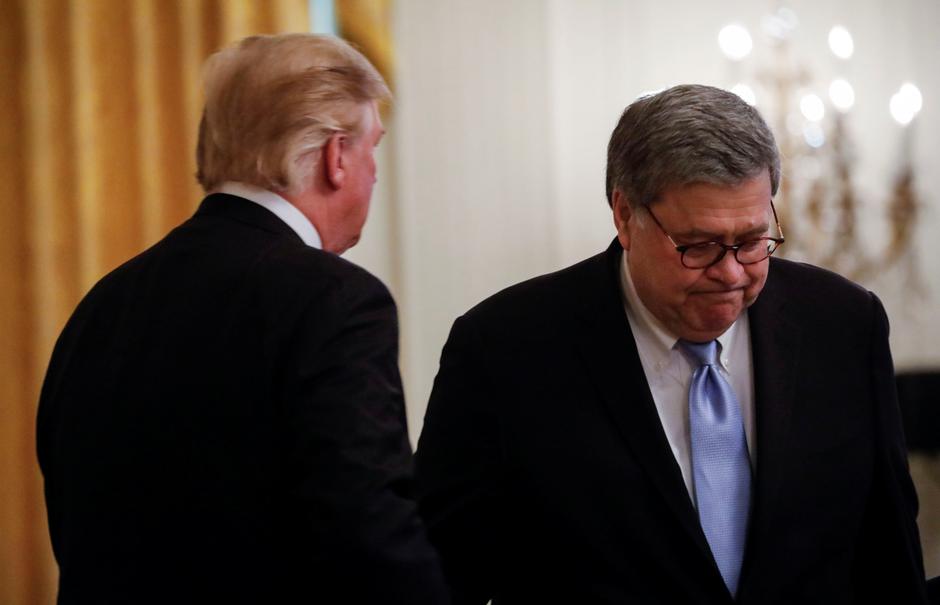 FILE PHOTO - U.S. Attroney General William Barr passes President Donald Trump as he heads to the podium to speak during the presentation of Public Safety Medals of Valor to officers in the East Room of the White House in Washington, U.S., May 22, 2019. REUTERS/Carlos Barria

WASHINGTON (Reuters) – U.S. President Donald Trump on Thursday ordered the intelligence community to cooperate with Attorney General William Barr’s review of the events that prompted an investigation into links between the Trump campaign and Russia.

The directive comes as the White House spars with congressional Democrats over the work of Special Counsel Robert Mueller, who led a two-year investigation into whether Russia meddled in the 2016 U.S. election and if there were any ties between the Trump campaign and Russia.

“Today, at the request and recommendation of the attorney general of the United States, President Donald J. Trump directed the intelligence community to quickly and fully cooperate with the attorney general’s investigation into surveillance activities during the 2016 presidential election,” White House spokeswoman Sarah Sanders said after Trump issued the directive.

The order also allows Barr to declassify any information he sees fit during his review.

A redacted version of Mueller’s report was released publicly in April. The probe found no evidence that the Trump campaign engaged in a criminal conspiracy with Russia and did not draw a conclusion on whether Trump obstructed justice, but outlined some incidents that Democrats have said may be obstruction.

Republican House member Mark Meadows tweeted on Thursday that “Americans are going to learn the truth about what occurred at their Justice Department.”

“While Trump stonewalls the public from learning the truth about his obstruction of justice, Trump and Barr conspire to weaponize law enforcement and classified information against their political enemies,” Schiff said on Twitter.

“The coverup has entered a new and dangerous phase. This is un-American,” he added.

In separate comments late Thursday on MSNBC’s “The Rachel Maddow Show”, House Judiciary Committee Chairman Jerrold Nadler said Mueller had told him that he is willing to testify to lawmakers in private, but is willing to make a public statement.

Nadler, a Democrat, told Maddow that if Mueller did testify behind closed doors then the public would get a written transcript of the testimony.

He wrote: “Intelligence Agencies were used against an American President.” @DevinNunes @ShannonBream @FoxNews This should NEVER happen to a President again! Dems are furious at Robert Mueller for his findings – NO COLLUSION, NO OBSTRUCTION. Now they should go back to work and legislate!”

Trump, a Republican, harbors suspicions that the Democratic Obama administration ordered him investigated during the 2016 campaign to try to undermine his candidacy, and he wants payback against those he believes were responsible.

“Comey, Brennan, Clapper, we’re draining the swamp, folks,” Trump told a rally on Monday in Pennsylvania, referring to former FBI Director James Comey, former CIA Director John Brennan, and James Clapper, a former director of national intelligence, all of whom have been critical of Trump.

Of specific interest to Trump are the warrants that emanated from a secretive court that authorizes surveillance on foreign powers and their agents. Trump supporters believe the warrants will identify those responsible for the Russia probe that is still roiling Washington.

Last month, Barr said at a Senate hearing that “spying” on Trump’s campaign was carried out by U.S. intelligence agencies, though he later referred to his concerns as focused on “unauthorized surveillance.”

Barr has assigned a top federal prosecutor in Connecticut to probe the origins of the Russia investigation in what is the third known inquiry into the opening of the FBI probe.