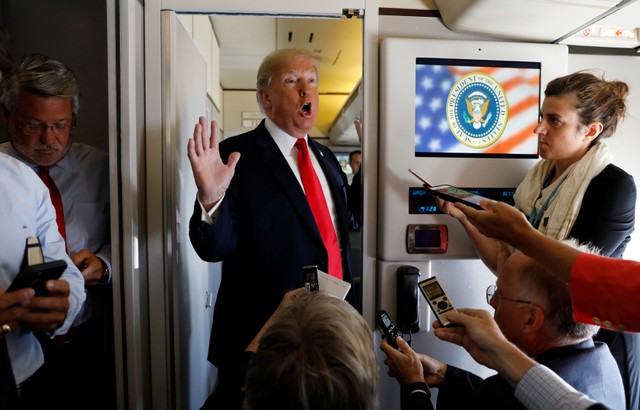 ABOARD AIR FORCE ONE (Reuters) – U.S. President Donald Trump said on Friday he was open to sitting down with investigators probing possible collusion between his election campaign and Russia “under certain circumstances,” but did not want to get caught in a “perjury trap.”

“I’d do it under certain circumstances,” Trump told reporters on board Air Force One.

“I think that if we’re going to meet it’s got to be a fair meeting,” he said. “I don’t want to be set up with a perjury trap.”

Rudy Giuliani, an attorney representing the president, told Reuters on Thursday that Special Counsel Robert Mueller, who is leading the Russia probe, wanted Trump to commit to a follow-up interview after providing written answers to questions about possible coordination between members of Trump’s presidential election campaign and Moscow.

“I don’t see how we can do it,” said Giuliani, who has repeatedly expressed concern about the risk of Trump committing perjury.

Lawyers for Trump have been negotiating over a potential interview with Mueller’s team since last year in the U.S. investigation of Russian meddling in the election, which Moscow denies. Trump has also denied any campaign collusion.