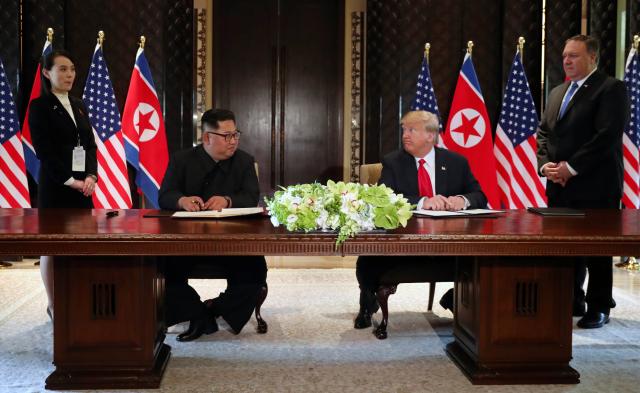 U.S. President Donald Trump and North Korea's leader Kim Jong Un look at each others before signing documents that acknowledge the progress of the talks and pledge to keep momentum going, after their summit at the Capella Hotel on Sentosa island in Singapore June 12, 2018. REUTERS/Jonathan Ernst

“President Trump committed to provide security guarantees to the DPRK and Chairman Kim Jong Un reaffirmed his firm and unwavering commitment to complete denuclearization of the Korean Peninsula,” said a joint statement issued after their historic summit in Singapore.

DPRK is the Democratic People’s Republic of Korea, the formal name of North Korea.

It however did not give any details on how denuclearization would be achieved. The document also made no mention of the international sanctions that have crippled North Korea’s economy, for pursuing its nuclear weapons program.

Nor was there any reference to finally signing a peace treaty. The combatants of the 1950-53 Korean War are technically still at war, as the conflict, in which millions of people died, was concluded only with a truce.

But the joint statement did say the two sides had agreed to recovering the remains of prisoners of war and those missing in action and repatriating them.

If the joint statement does lead to a lasting detente, it could fundamentally change the security landscape of Northeast Asia, just as former U.S. President Richard Nixon visit to Beijing in 1972 led to the transformation of China.