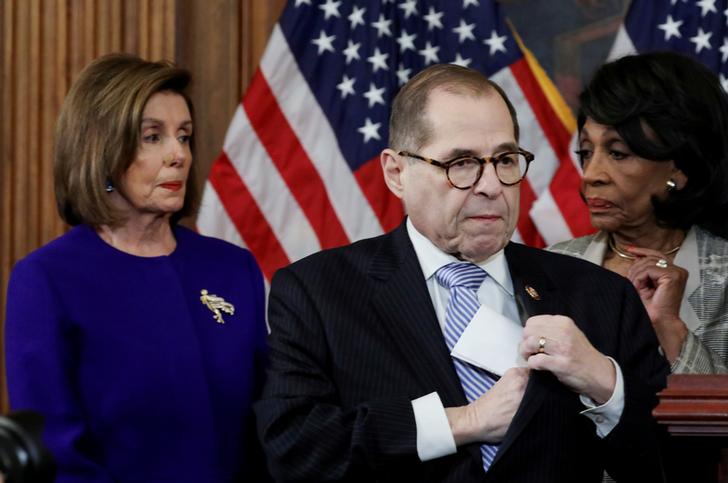 WASHINGTON (Reuters) – Democrats in the U.S. House of Representatives announced impeachment charges against President Donald Trump on Tuesday, making him the fourth president in U.S. history to face a formal effort to remove him from office.

The Democratic-controlled House is almost certain to vote to impeach the president as soon as next week, setting up a trial in the Republican-led Senate early next year, shortly before the presidential election kicks off with primaries in Iowa and New Hampshire.

The effort to force Trump out of the White House faces long odds of success. At least 20 Senate Republicans would have to vote to remove him from office, and none so far have indicated they are considering such a move.

The Senate may opt to forego a full trial and instead hold its vote after House Democrats and Trump’s defenders make their opening statements, Republican Senate Leader Mitch McConnell said at a news conference. That may go against the wishes of Trump, who wants to call his own witnesses.

The impeachment charges accuse Trump of “betraying” the country by abusing power in an effort to pressure Ukraine to probe a political rival and then obstructing Congress’ investigation into the scandal.

House Judiciary Committee Chairman Jerrold Nadler told reporters that Democrats had to take action because Trump had endangered the U.S. Constitution, jeopardized national security and undermined the integrity of the 2020 election.

“No one, not even the president, is above the law,” Nadler said at a news conference. His panel could take up the charges as soon as Wednesday ahead of the full House vote.

White House spokeswoman Stephanie Grisham accused Democrats of engaging in a “baseless and partisan” attempt to undo his surprise victory in the 2016 election.