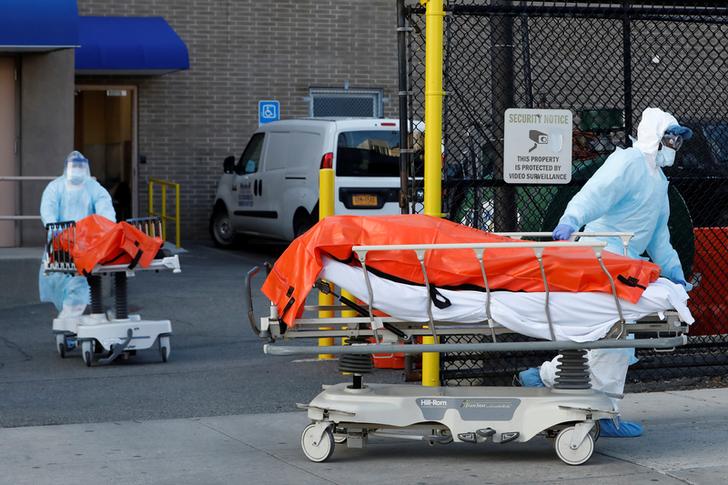 Healthcare workers wheel the bodies of deceased people from the Wyckoff Heights Medical Center during the outbreak of the coronavirus disease (COVID-19) in the Brooklyn borough of New York City, New York, U.S., April 4, 2020. REUTERS/Andrew Kelly

WASHINGTON (Reuters) – President Donald Trump told Americans to brace for a big spike in coronavirus fatalities in the coming days, as the country faces what he called the toughest two weeks of the pandemic.

“There’s going to be a lot of death,” Trump said at a briefing with reporters.

He pushed back on criticism that the federal government has not done enough to get ventilators that many critically ill coronavirus patients need to survive to the states, saying some governors are asking for more machines than they will need.

“Fears of shortages have led to inflated requests,” Trump said of submissions his administration has received to dole out equipment from the strategic national stockpile.

The United States has the world’s highest number of known cases of COVID-19, the flu-like respiratory disease caused by the coronavirus. More than 306,000 people have tested positive in the United States and over 8,300 have died, according to a Reuters tally.

White House medical experts have forecast that between 100,000 to 240,000 Americans could be killed in the pandemic, even if sweeping orders to stay home are followed.

“We are coming up to a time that is going to be very horrendous,” Trump said at the White House. “We probably have never seen anything like these kind of numbers. Maybe during the war, during a World War One or Two or something.”