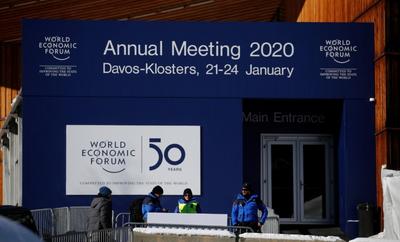 DAVOS, Switzerland (Reuters) – Hundreds of protesters calling on global leaders to take swifter action on climate change will face up to 5,000 military personnel and police from across Switzerland as they march to the ski resort of Davos for a planned demonstration.

Greta Thunberg, the 17-year-old Swedish activist, is due to address the annual World Economic Forum (WEF) gathering of global business and political leaders, where U.S. President Donald Trump is the headline speaker.

The 50th edition of the meeting sees the return of Trump after he pulled out in 2019.

Fighter jets, ground defense systems and additional radar, among other measures, will protect some 3,000 participants at the meeting, Swiss police officials said on Monday.

“Various people in the world are under great threat, if you can put it that way, and wherever they appear, they deserve commensurate security measures,” Walter Schlegel, the regional police commander, told a news conference on Monday.

“The U.S. president has a big security detail that must be deployed,” Schlegel said.