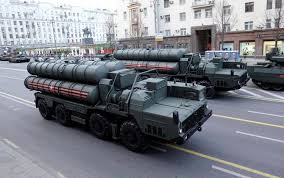 Russian servicemen sit in the cabins of S-400 missile air defence systems in Tverskaya Street before a rehearsal for the Victory Day parade, which marks the anniversary of the victory over Nazi Germany in World War Two, in central Moscow, Russia April 29, 2019. REUTERS/Tatyana Makeyeva

“Our Honourable President brought up the proposal to establish a working group regarding the procurement of the S-400 defense system from the Russian Federation,” it said.

The two countries have argued for months over Turkey’s order for the missile defense system, which the United States says is incompatible with NATO’s defense network and could compromise its F-35 fighter jets.

Ankara has said a working group could assess the impact of the S-400 on the fighter jets, but on Friday said that it has not heard back from the Americans.

The White House confirmed on Monday that Trump and Erdogan had discussed Turkey’s planned purchase of the S-400 missile defense system.

Asked if Trump raised with Erdogan the U.S. concerns about Turkey buying the S-400 system, a senior administration official said:

“We have been clear and consistent in emphasizing our grave concerns on the S-400 acquisition with representatives of the Turkish government on numerous occasions and at the highest levels.”

U.S. Secretary of State Mike Pompeo and several U.S. senators have warned Turkey it will face penalties for buying S-400s under a law that calls for sanctions against countries procuring military equipment from Russia.

Turkey has said that as a NATO member, it poses no threat to the United States and the sanctions should not apply.

Trump and Erdogan also discussed trade and the ongoing crisis in Syria, the White House said.