Trump ‘comfortable with any outcome’ from pivotal Xi talks – official 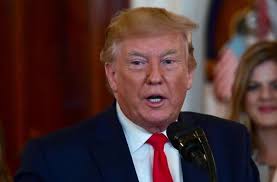 U.S. President Donald Trump speaks before signing an executive order aimed at requiring hospitals to be more transparent about prices before charging patients for healthcare services, at the White House in Washington, U.S. June 24, 2019. REUTERS/Erin Scott

WASHINGTON (Reuters) – U.S. President Donald Trump views this week’s meeting with Chinese President Xi Jinping as a chance to see where Beijing stands on the countries’ trade war, and is “comfortable with any outcome” from the talks, a senior U.S. official said on Monday.

The much-anticipated meeting at the G20 summit in Osaka, Japan, will be the first time the leaders have met since late November – and their first face-to-face session since trade talks broke off in May, leading to a hike in U.S. tariffs on imports of Chinese goods.

The senior administration official, speaking to reporters on condition of anonymity, declined to give any details about plans for the meeting, other than to say it would likely happen on the second day of the Friday-Saturday summit.

“It’s really just an opportunity for the president to maintain his engagement as he has very closely with his Chinese counterpart. Even as trade frictions persist, he’s got the opportunity to see where the Chinese side is since the talks last left off,” the official said.

“The president is quite comfortable with any outcome,” the official added.

Trump, who is known for preferring one-on-one meetings to multilateral talks, will meet separately with at least eight world leaders while he is at the summit, the official said.

He plans to meet Russian President Vladimir Putin, Saudi Crown Prince Mohammed bin Salman and Turkish President Tayyip Erdogan, the official said, declining to give details of the dates and times because Trump’s schedule was still in flux.