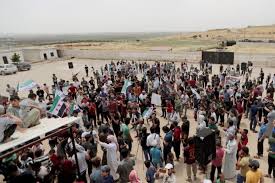 Displaced Syrians gather during a protest calling for an end to the strikes and for Ankara to open the frontier at the Atmeh crossing on the Syrian-Turkish border, in Idlib governorate, Syria May 31, 2019. REUTERS/Khalil Ashawi

“Hearing word that Russia, Syria and, to a lesser extent, Iran, are bombing the hell out of Idlib Province in Syria, and indiscriminately killing many innocent civilians. The World is watching this butchery. What is the purpose, what will it get you? STOP!” Trump wrote in a Twitter post.

On Friday, the Kremlin said it was Turkey’s responsibility to stop rebels in Syria’s Idlib province from firing on civilian and Russian targets. Turkish President Tayyip Erdogan has long complained to Moscow about the Russian-backed Syrian government strikes against rebels who control the country’s northwest.

The offensive in Idlib is the biggest escalation of the war between Syrian President Bashar al-Assad and rebel opponents of his government since last summer, and has raised fears of a humanitarian crisis as Syrians displaced by the fighting seek shelter at the Turkish border.

More than 200,000 people have fled the violence in Idlib since the strikes began at the end of April, according to the United Nations.

When asked on Sunday night before departing on a state visit to Britain what he intended to do about the massacre of civilians in Idlib, Trump told reporters he did not like the situation. “Bad things are happening,” Trump said.