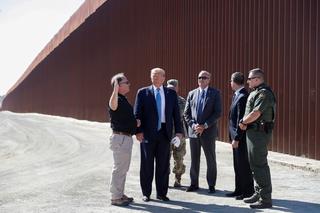 WASHINGTON (Reuters) – The U.S. Defense Department sent Congress a request to shift nearly $4 billion from the military budget to pay for a wall on the border with Mexico, a central promise of President Donald Trump’s campaign for the White House four years ago and bid this year for a second term.

Lawmakers said they received a request on Thursday to reprogram more than $3.8 billion from funding for the National Guard and weapons programs, setting the stage for a possible confrontation with Democrats.

Congressional Democrats, who opposed Trump’s past diversion of billions of dollars in military spending to the border wall project, said the decision was dangerous and misguided.