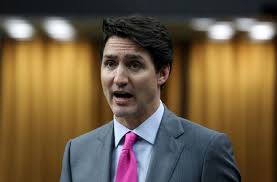 OTTAWA (Reuters) – Prime Minister Justin Trudeau spoke to U.S. President Donald Trump on Thursday and discussed the detention of two Canadian citizens in China, which has triggered a major crisis between Ottawa and Beijing.

Canada is pressing Washington to do more to free the two men, who were detained after Canadian police arrested a Huawei Technologies Co Ltd executive last year at the request of the United States. China has also halted imports of Canadian canola and some pork products.

A statement from Trudeau’s office said the two leaders talked about the two detained men as well as “Canada’s ongoing efforts to secure their release.” It gave no details.

A White House statement said Trump expressed to Trudeau Washington’s “solid commitment to standing by Canada in efforts to secure the fair treatment and release of Canadian citizens currently detained in China.”

The case of the two detainees is one of several irritants between Canada and the United States. Another is the tariffs that Washington slapped on Canadian exports of steel and aluminum last year, citing national security concerns.

Trudeau raised the punitive measures and “reiterated the importance of their removal,” the statement said.

The White House statement said the two leaders discussed the U.S.-Canada-Mexico (USMCA) trade deal and U.S.-China trade talks, but it gave no details.

Canadian officials have made clear there is no chance Ottawa will move to ratify the USMCA pact unless the tariffs are lifted.