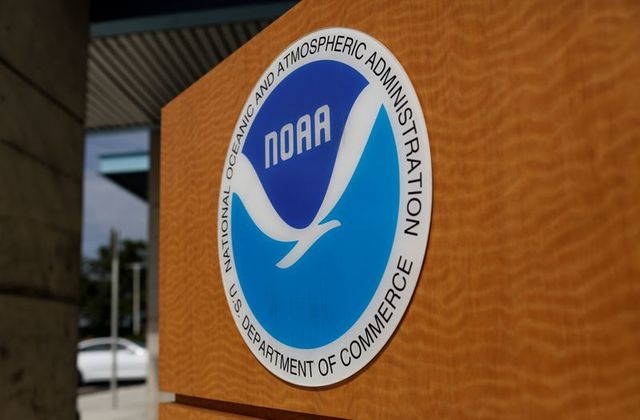 FILE PHOTO: The logo of the National Oceanic and Atmospheric Administration is seen at the National Hurricane Center in Miami, Florida, U.S. August 29, 2019. REUTERS/Marco Bello/File Photo

(Reuters) – Tropical Storm Beta was predicted to bring a foot of rain to parts of coastal Texas and Louisiana next week as the 23rd named storm of this year’s Atlantic hurricane season moves ashore on Monday night, the National Hurricane Center said.

Forecasters warned on Sunday that coastal communities could be inundated with floods and see sustained winds of 60 miles per hour (95 km per hour), though the storm is expected to weaken as it moves inland.

Slow-moving storms that deluge coasts are becoming a regular occurrence, a development that scientists attribute to climate change.

This month marks only the second time in history that the sheer number of storms has forced forecasters to turn to the Greek alphabet for names, having exhausted their alphabetical list of names selected before the season began. The first year that storms exceeded given names was 2005, when there were a record 27 named storms.

Beta is the third named storm in the U.S. Gulf of Mexico in less than a month, following Laura and Sally.

Oil and gas producers had been restarting their offshore operations over the weekend after being disrupted by Sally. As Beta neared, Royal Dutch Shell Plc RDSa.L halted some oil production and began evacuating workers from a platform in the Gulf.

Slow-moving Beta could drop between 8 and 12 inches (20 to 30 cm) of rain through Thursday, with up to 20 inches in some isolated areas, the NHC said, warning residents to beware flash flooding.

Forecasters were also tracking Hurricane Teddy in the Atlantic Ocean as it headed toward Bermuda, where it was due to arrive Sunday night before heading north to Nova Scotia for Wednesday. The storm is large, with hurricane-force winds extending 80 miles (135 km) from its center, and could cause dangerous rip currents along beaches on the U.S. East Coast, the NHC said.