Travellers from US quarantined in American Samoa 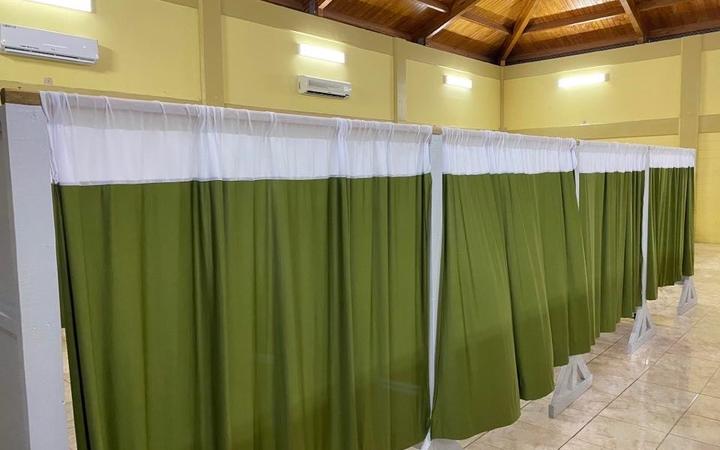 Veterans Affairs Center which has been turned into a quarantine facility Photo: Monica Miller

Forty-two of the 145 passengers who arrived on the Hawaiian Airlines flight from Honolulu Thursday night have been quarantined.

This is the biggest group of travellers that have been taken in for quarantine since the Covid-19 outbreak World-wide.

Director of Health Motusa Tuileama Nua said none of the travellers displayed signs of illness but all were from US states with large numbers of Covid-19 cases such as California and Washington.

The group is being quarantined at the Veterans Affairs (VA) Center for which renovations were just completed two hours before the Hawaiian Airlines plane touched down at Pago Pago International Airport.

The VA Center which is used for meetings, seminars and other gatherings of veterans has been partitioned into cubicles and showers have been installed.

The rest of the passengers on Thursday’s Hawaiian Airlines flight are being home in quarantine.

Meanwhile more than 100 local residents who had traveled to Samoa are being quarantined at the Department of Youh and Women Affairs Center in Pago Pago and the Catholic Church retreat center at Fatuoaiga.

Nearly 50 American citizens who were evacuated from Samoa, departed on a Thursday’s Hawaiian Airlines flight to Honolulu.

Hawaiian Airlines has agreed to a request by Governor Lolo Matalasi Moliga to suspend its flights to American Samoa for 30 days.

The airline which operates two weekly flights on the Honolulu/Pago Pago route this week had only one flight, after the governor asked to cancel the Monday flight to give the territory time to get quarantine facilities ready.

But yesterday the governor sent off a request to Hawaiian Airlines President and CEO Peter Ingram to please suspend flights because the territory doesn’t have any way of testing for coronavirus.

With the suspension, the territory is now left without any passenger service, and the only flight arriving here will be the weekly cargo service.

Samoa Airways and Talofa Airways discontinued flights on the inter Samoa route this week. But Samos Airways is flying a daily service between American Samoa’s main island Tutuila, and the outer islands of Manu’a. One of the airlines Twin Otter planes is based in the territory for two weeks.

The US Postal Service said all mail will now be carried by the cargo flight.