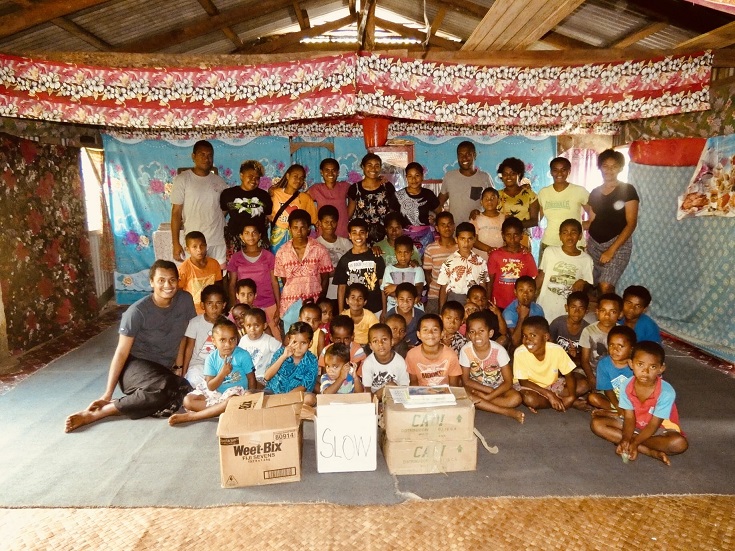 People say Matokana Village, located in the interior of Navosa in Nadroga, is the last village before you reach heaven.

It’s a common saying because of its geographical location high up in the mountains, making it a real challenge for any visitor.

Travelling to the village takes a whole day, by foot and vehicle and it’s not a journey for the faint-hearted – only for those brave enough to take on the challenge.

Taking on the mission were 70 students of the  University of the South Pacific. The trip was an educational one and I was blessed to be a part of this rare opportunity to explore a place where not a lot of people have been.

The “ride or die” trip up the valleys

Our trip to Matokana began as early as six on Monday, September 21. We took two carriers.

The early morning travel was met with freezing temperatures, but that did not dampen our spirits.

It took us two hours from the school campus to Sigatoka Town which included an hour stop-over before the tough journey to this mysterious village began.

The road was rough and bumpy on the three long hours ride. There was no pitched road as soon as we lost sight of Sigatoka Town. It was gravel road all the way.

We sang several hymns during our ride to keep us entertained as some were becoming sickly due to the long travel.

But a great sign of relief when we finally arrived at a riverside where two four-wheel vehicles waited to transport our belongings to our accommodation at the village.

We watched as our belongings took the lead and there began our track uphill. We called it ‘the great walk’. Apparently we crossed the same river about 30 times.

The river was like a long string weaving through untouched terrains. The journey was tough both physically and mentally and after one hour of walking, we reached Waibasaga Village. Villagers had prepared us lunch – pork with less fat and finely cooked caramelised with lemon, chilly and as a side dish cassava.  A dish all 70 indulged in with no complaints – who would have said no. The meal was delicious. We rested for about an hour and then it was back on the road again.

We walked for three long hours without a single stop this time. It was raining, slippery and dark, but we were determined to reach the village.

On the way we talked among ourselves interested to know how this village was formed so far away from civilisation, and even though the journey was long I knew there would be stories waiting for us to hear once we reached that village next to heaven.

After crossing the river several times, I thought we were just metres away from the village, but there seemed no end to the winding road. We climbed a number of hills for an hour until and reached a remote village. Even though the body was willing to settle for the night, our minds were determined to complete the mission.

It was dark by the time we reached the village, some of us had to be navigated through the thick darkness with torches.

The last lot reached the village after seven. We had been travelling for more than 12 hours, a first for many of us except for the guide. More next week