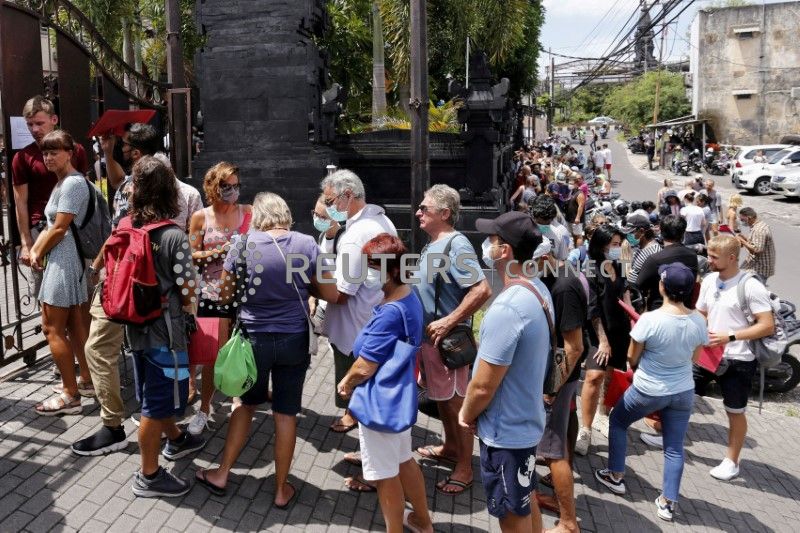 Foreign citizens stand outside local immigration office as they queue for extending their visa permit, amid the spread of coronavirus disease (COVID-19) in Jimbaran, Bali, Indonesia, March 23, 2020. REUTERS/Johannes P. Christo

KUTA, Indonesia (Reuters) – Travellers stranded by coronavirus in some of Southeast Asia’s idyllic tourism hotspots are trying to extend visas as more countries enforce travel restrictions that in some cases make it impossible to go home.

The total number of stranded tourists is not known, but scenes of frustration are playing out in several countries.

On the Indonesian resort island of Bali – famed for its beaches, terraced rice fields and cultural sites – hundreds of tourists in face masks queued up outside the Ngurah Rai Immigration Office in the tourist area of Kuta seeking legal permission to extend their stay.

“We have to stay here as we have no choice,” said Natalie Gisbert, a traveller from New Caledonia, the self-governing French territory in the South Pacific, who said her government was closing airports at home.

American visitor Felix Isuk, who works in Singapore, said he thought it was better to stay put in Southeast Asia than to return to the United States.

“In the U.S. there are about 30,000 cases,” Isuk said. “So, I think if things or situation get worse here I’ll go back to Singapore. So that’s the main reason why I’m staying here in Indonesia.”

In Thailand, the main immigration centre in the capital Bangkok was crowded on Monday with hundreds of tourists and other foreign nationals trying to extend visas before they expired.

“I’ve been here since 8.30 a.m.!” one man cried on being told officials could not process his application that afternoon.

A long queue snaked through the building, and many were told to come back another day.

The problems are by no means confined to Bangkok.

Rada Sereseanu and her husband, touring Southeast Asia in a camper van, had planned to drive into Myanmar but the German couple find themselves stuck in southern Thailand as the country shuts its land borders.

“We thought the situation would get better, but it seems to be getting a little bit crazy,” Sereseanu said by telephone from near the seaside area of Hua Hin.

Thailand has seen sharp spikes in coronavirus cases, bringing its total number of cases to 721 from 147 in the last week.

In Vietnam, where the government has announced a ban on all foreigners entering, British ambassador Gareth Ward urged UK citizens to seek the earliest commercial flights and gave an embassy email address to contact.

He also advised finding a hotel near an airport in either Hanoi or Ho Chi Minh City.

“You should prepare for the fact that you may not be able to leave quickly, so choose a place that you can afford for an extended period of time,” he said.