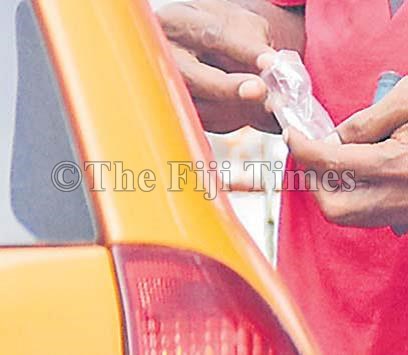 What could this be? A man pulls out something from a little plastic bag and gives it to a driver who then drives off in Nausori Town. Picture: ATU RASEA

The trader, identified as “Ali”, claimed police laxity had resulted in the increase of drug trade.

“Nausori is a drug hub, it’s being used as a drug hub because of police laxity and dealers take advantage of the situation,” the 47-year-old said.

He also claimed the situation had deteriorated because officers were no longer conducting foot patrols. “When we call the station, they say they are sending a vehicle.

“Officers in Nausori only do foot patrols during lunch and tea time, otherwise they just travel around in their nice airconditioned vehicles.

“We have supported them all the way and they need to change their strategies.”

Mr Ali also claimed that about 60 street kids who loitered in town were also involved in drug peddling. “Some children have left school and this is what they do in town and it is really sad they are sniffing glue and selling drugs and contraband.

“Ratepayers need to be looked after because these are the people who are paying taxes.”

Mr Ali said it was the responsibility of those in power to look after the public.

“As soon as we highlight this in the media they will start patrolling, do we really need to be doing that, they need to do their job,” he added.