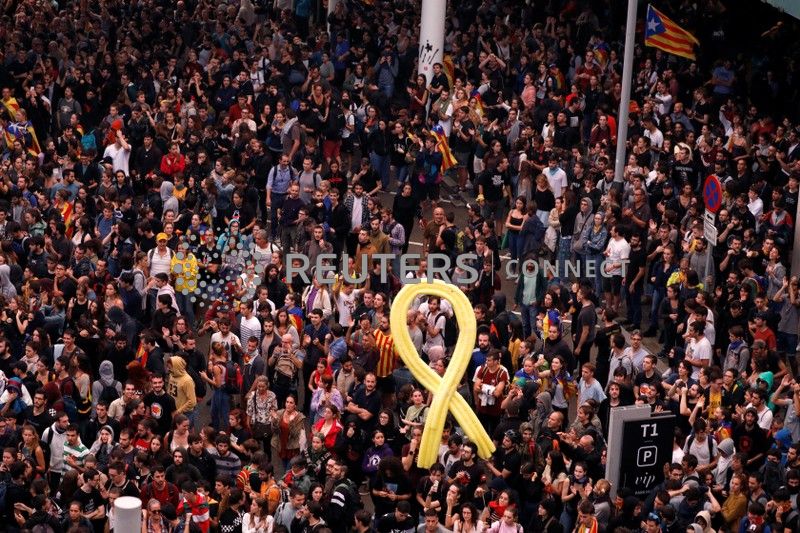 FILE PHOTO: Protesters gather at Barcelona's airport, after a verdict in a trial over a banned independence referendum, Spain October 14, 2019. REUTERS/Jon Nazca

MADRID (Reuters) – Hundreds of travellers were stranded at Barcelona’s El Prat airport on Tuesday when 45 flights were cancelled in addition to more than a hundred grounded on Monday due to protests by Catalan independence supporters, the airport authority said.

Barcelona’s airport, Spain’s second largest, was the focal point of the protests, with thousands of people gathering there following the jailing of nine separatist Catalan leaders by the Spanish Supreme Court. Riot police had charged at the crowd using batons and firing foam balls to hold back the protesters.

Jordi Munoz, a spokesman for Spanish airport operator Aena <AENA.MC> told Reuters no delays or cancellations were planned for Wednesday, and Tuesday had been largely calm.

“The 45 cancelled flights today are actually a consequence of yesterday’s cancellations,” he said.

He said most of Monday’s protesters did not make it inside the terminal and that there was little infrastructural damage.

Lucille, a 64-year-old pensioner from France whose flight was delayed, said: “No one could leave or exit the airport. I spent the night on this [piece of cardboard], without food or water.”

“The vending machines quickly emptied and the queues to charge phones were endless. I’m exhausted,” she said.

Munoz said he was not able to provide an estimate of the economic impact or the number of passengers affected by the protests at this stage, as airlines had not communicated flight fill rates with airport authorities.

Another passenger Estelle, 45, said: “We saw this huge mass of policemen, and protesters, especially all along the highway – I’d never seen anything like it.”

She also said she supported the Catalans’ right to protest as “part of democracy.”