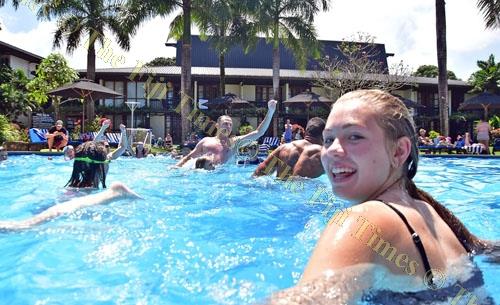 Madison Sloane, closest to camera, of Sydney, Australia enjoys a dip in the pool with other tourists at the Warwick Fiji Resort & Spa in Sigatoka in September last year. Picture: FILE

FIJI’S tourism earnings from its major tourist market Australia increased by 2.5 per cent in December last year compared with the same period in 2016.

The Fiji Bureau of Statistics released statistics on Fiji’s earnings on tourism for the December quarter of last year which highlighted that Fiji’s earnings from Australian tourists stood at $271.5 million, contributing 56.3 per cent of the total earnings.

Meanwhile major changes were also recorded in tourism earnings from New Zealand whereby earnings increased by 2.1 per cent ($1.5m) to $71.8m contributing 14.9 per cent to the total.

A comparison of earnings in 2017 with 2016 showed that major changes were recorded in earnings from countries such as Australia and New Zealand.