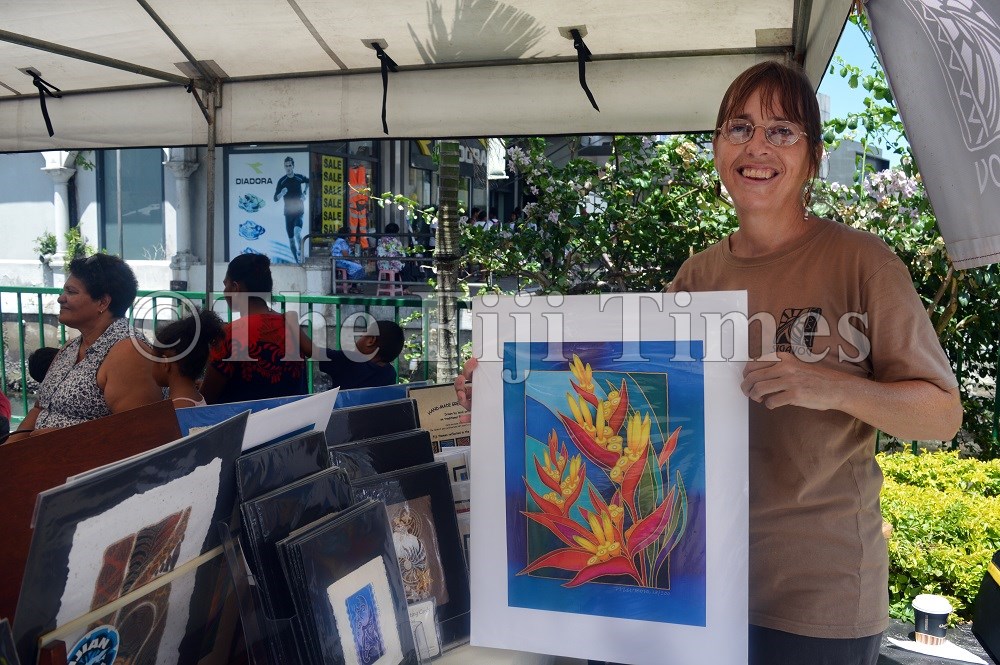 Maria Rova of Sigavou, displays one of her paintings at the WEBC Trade Show in Suva, on Saturday. Picture: MONIKA SINGH

THERE is a need for local businesses to embrace the concept of originality if they wish to succeed in their business or survive the competition.

“I have been a member of WEBC since 2015 and our business is an art studio – family run art studio based in our home in Nadi,” she said.

Ms Rova said she had a small team of about seven people who worked with her at the studio mostly making artwork painted on to masi, artwork on other mediums such as dyes on silk, sand and a bit of cement sculptors.

At the trade show Ms Rova had brought along a lot of their smaller bark paintings which she said would make really great gifts and they are easy to carry and travel with overseas.

“They can be framed up and hung — back in the studio we have much bigger paintings which are several metres in length so we do a wide range of different products.”

Ms Rova said it had been really great to be part of WEBC and to support this initiative of women working with women to raise the profile of women in business and to address some of the common issues that they faced, the problems that women entrepreneurs faced and to be a moral support to each other.

Meanwhile Ms Rova said artists in Fiji faced a lot of competition from imports coming from China, Indonesia and Malaysia because as artisans the locals were in no position to compete with them.

She said it was difficult for locals to compete with their production methods and their rock bottom pricing that they are able to achieve with their mass producing.

“So the only thing we can really offer is something that’s very uniquely Fijian and has been created as a completely original piece,” she said.

“So that is what we have been trying to do as a company — just go for that niche market.”

Ms Rova said being based in Nadi their big focus was the tourism industry and that was one aspect that kept the business going.

She says the tourism industry was a renewal market with every plane that arrives bringing in people with money to spend and often they are not able to find the good quality locally made product to take home with them.

“So we are trying slowly to get our foot through that door. But it’s also lovely to see that over the years more and more local people are taking pride in the local art and have a piece of local art in their home or office and so the number of our local customers are slowly growing.”