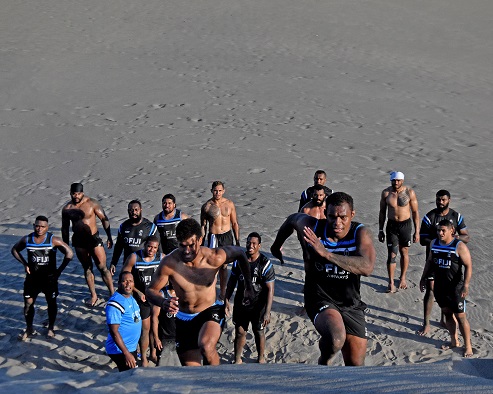 FLYING Fijians lock forward and Olympics gold medallist Leone Nakarawa says it is important for senior players to act as role models for the younger players in the squad to ensure the team works together as one solid unit.

“The senior players have to act as role models for our junior players,” Nakarawa said.

“If we do the right thing they will as well, but if we slack off and do our own routine we will have taught the younger players the wrong thing,” the Kadavu man said after a Fiji Airways Flying Fijians training session at the sand dunes in Sigatoka yesterday.

Nakarawa has taken the call to represent the Flying Fijians as a privilege and is grateful for the opportunity to come back and represent his nation.

“For all the Fijian rugby players around the world and for me, it is an honour and privilege to come back and represent my country.

“We are here in the squad but now we have to work hard for the upcoming test against the NZ Maoris.”

Nakarawa who is eyeing a spot to represent Fiji at the Rugby World Cup for a third time says although with stiff competition with new players there is no tension in vying for spot in the final squad.

“I respect everyone, and no one has an established spot for next week’s game against the New Zealand Maori or the world cup.

“I rely in my faith in God which is the first thing for me, and the rest will take care of itself.”