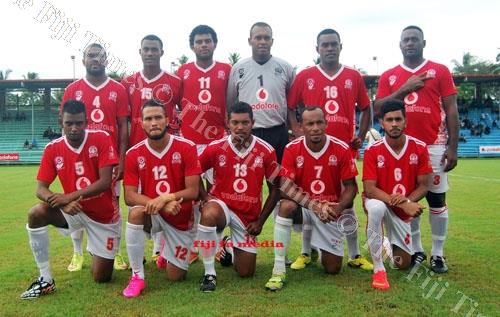 The Rewa football team at an earlier tournament. Picture: SUPPLIED

REIGNING Vodafone Fiji FACT champion Rewa will face tough battles in this year’s tournament after being drawn alongside heavyweights Ba and Labasa.

The Delta Tigers who will also host the tournament on May 11 will also face giants killer Dreketi in their pool games.

Former champion Nadi which bowed out in last year’s final will face stiff competition against Lautoka Blues, Suva and Tavua in the other pool.

Lautoka Football Association president Abdul Kadar said the pool games would be tough because all teams would want to reach the semi-finals.

He said while the aim was to do well at the Fiji FACT, the focus was on the Oceania League semi-final clash against Marist Football Club of the Solomon Islands.

“We have been drawn in a tough Fiji FACT pool and we expect tough battles against Suva, Nadi and Tavua,” Kadar said.

“We cannot underestimate any team because all will be capable of winning. Newcomer Tavua was impressive last season.”

Kadar said the O’League was a different ball game and the boys have been training hard for the event.

“The O’League semi-final is a different level of competition and the boys had been working hard at training to counter their oppositions.”

Lautoka will host Marist on Sunday with the second match to be played at the Solomons next week.