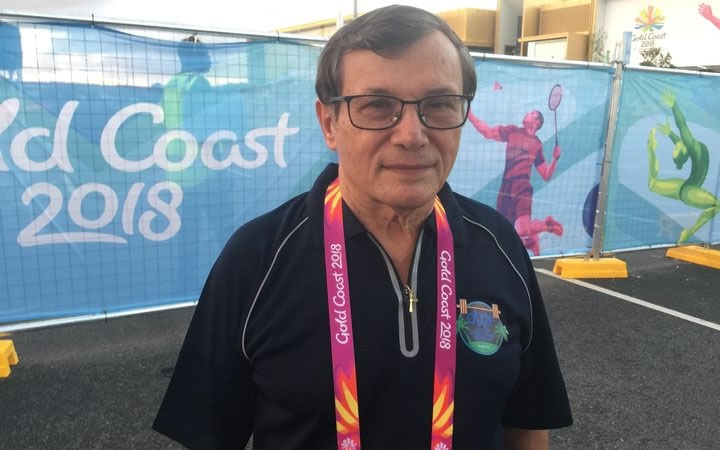 SUVA, 11 JUNE 2021 (ONOC MEDIA)—Pacific Games gold medallists Dika Toua and Morea Baru have both settled in well in Melbourne, Australia for their preparations for the Tokyo Olympic Games in July.

Pacific Games gold medallists Dika Toua and Morea Baru have both settled in well in Melbourne, Australia for their preparations for the Tokyo Olympic Games in July.

Oceania Weightlifting Federation General-Secretary and coach Paul Coffa said that both lifters arrived in Australia three weeks ago after spending two weeks in quarantine in Brisbane.

“Both of them have settled down quite well at the institute gym in Dromana – Melbourne and they are lucky that they have accommodation within a few kilometres from the gym,” he said.

“The PNG Olympic Committee should be congratulated in organising the accommodation so close to the gym.” He told the Post-Courier that both Toua and Baru are now with him and are fit, they have been able to recover quickly; and they are training extremely hard in preparation for the Olympics.

“I will make sure that both of them will compete early July prior to the Olympics in order to ascertain their level in the run up to the games; I am confident that both lifters will be at their peak by Tokyo,” said Coffa.

It’s already been a few days, and she still hasn’t fully grasped the reality of her latest news: Jacinta Sumagaysay is officially going to the Olympics

The 55-kg weightlifter received one of a handful of Olympic invitations to compete, announced Ricardo Blas Sr., president of the Guam National Olympic Committee on Saturday.

Her coach, former Guam Olympian Edgar Molinos, announced the news to the weightlifting team’s group chat on Saturday evening. Sumagaysay didn’t find out about it until 4 am.

She’d been asleep since 6 p.m. the night before. “So coach writes, ‘Team, please congratulate Ja. She’s going to Tokyo.’ and then everyone started saying congrats … I read all of that. I was still trying to process the news,” she said.

Sumagaysay has been chasing her Olympic dream for years, as soon as she learned she was pretty good at lifting hundreds of pounds of metal above her head. She started her official path to Tokyo 2020 in early 2019 when she competed in her first competition of the year.

She was required to compete at six such events (five of them open globally), and her lift totals had to be good enough to put her in the top two of her 55kg weight class within Guam’s Olympic region.

Within Oceania, she would not only compete against many of our regional neighbors and powerhouses of the South Pacific such as Nauru, New Caledonia and Tahiti, but also the titans of our Oceania, Australia and New Zealand.

Within 14 months, Sumagaysay competed in five of six events, she was lifting enough to be among the top three in her class, and qualifying for the Olympics seemed to be in reach. But then the coronavirus pandemic stopped that in its tracks. Thus began another 14 months of waiting. It was never clear to her if there would be new qualifications issued since global sports events — including her sixth competition and the Olympics — were canceled or postponed.

Through it all, she still trained as hard as her body would allow. She later confesses that she wouldn’t have changed anything even if she learned long ago she couldn’t make the Olympics. She loves weightlifting, Olympics or not, and continues to train six days a week. She’ll have to take a break come July 23. That’s the night of the Opening Ceremonies of the 2021 Olympic Games.

“I still can’t bring myself to tell anyone. My coach, my team, the Fudoshin Wrestling team … nobody else knows,” she said.

“Not even my family. They’ll be excited for me, of course, but I’m not one to tell them or anyone else about what I’ve done. Better if they find out and ask me about it, then I can share.” If so few people know about her invite to begin with, how will her mom and family find out about it all? “They will read about it in the Pacific Daily News.

That’s how they’ve always gotten information about my weightlifting,” said Sumagaysay. Molinos, who rode the emotional roller coaster with his athlete for years, was proud beyond words about her Olympic Invitation.

He knows the pain she felt when her sixth event was postponed along with the Olympics.

He too, showed up six days a week to train Sumagaysay and others. It took him a while to respond and when he did, he went straight to the heart.

“She worked so hard, harder than anyone else could imagine,” he said. “She really deserves to go.”

Sumagaysay says she’s already started to get a deluge of requests for information, such as her clothing sizes and bio information. She doesn’t look forward to the paperwork but she’ll do it. She’s already punched her ticket, now it’s time to fill in the blanks. But not now, maybe not even this week. The paperwork can come a little later. She will allow herself as long as it takes to fully realize that she’s less than two months away from living her dream. For real. “When coach told me I got the invite to go to the Olympics, it became just a little more real to me,” she said.

“I was still in disbelief. My response to him? I said, ‘OK coach. Let’s go train.”

Sean Findlay, a newcomer with just four caps, and his mentor Shea McAleese, heading to his fourth Olympics with 314 caps for his country, are the main features of the New Zealand men’s hockey squad named today for the Tokyo Olympics.

New Zealand Men’s Head Coach Darren Smith said while it was an experienced team they were taking to Tokyo it was also the first major tournament for a number of players.

“It’s a pretty experienced group but it’s also the first pinnacle event for players like Sam Lane who have previously missed out through injury or Jacob Smith and Nick Ross who have been rewarded for their perseverance.

They’ve shown they’re really determined to be there.” Smith said it was an emotional phone call to the bolter of the squad Findlay, who is the current New Zealand Under-21 Player of the Year.

“Sean is a real go-getter and an incredibly versatile player. Shea has had a big influence over Sean’s career and it was a special moment when they got to play together in the recent series with Australia. Shea was equally as excited when I called him.”

New Zealand Women’s Head Coach Graham Shaw admitted it was one of the toughest teams to select with only four internationals in 15 months.

“With the lack of opportunities we’ve had it was a difficult squad to select. It’s certainly been very unusual circumstances but we’ve got a balanced squad that poses a massive threat on attack alongside a strong defensive unit.”

Shaw was excited by the potential of the young trio of Shannon, Doar and Ralph. “We have some exciting young talent in our ranks especially Olivia (Shannon), Katie (Doar) and Hope (Ralph) who have stood up in recent years and all have huge futures in the black dress.”

New Zealand Women’s Captain Michelsen, currently the most capped New Zealand women’s player of all time with 291 matches, said the team was pleased to be finally heading to Tokyo after such a long wait. “All the players are so thrilled to hear their names selected for Tokyo.

It has been a long training period leading to this point, but now, with less than 50 days to go, you can feel the excitement amongst the group.” New Zealand Men’s Captain Tarrant, off to his second Olympics, said the recent series against Australia had given the team a much-needed taste of international competition that the European sides had been enjoying recently.

“The Kookaburras put us under real pressure and we want more of that so we can get better and be playing as well as we can come Tokyo time.” NZOC CEO Kereyn Smith congratulated all the athletes named to the team.

“Well done to all of the athletes who’ve been named to the New Zealand Team today,” said Smith.

“New Zealand has an extremely proud history in hockey at the Olympic Games and we can’t wait to see you add to that legacy in just 43 days time in Tokyo.”

The Black Sticks squads head to Perth next Friday to play two doubleheaders against Australia on 26 and 27 June. The naming of the hockey teams takes the total number of athletes selected to the New Zealand Team to 85.