Totori: Victory for the kids 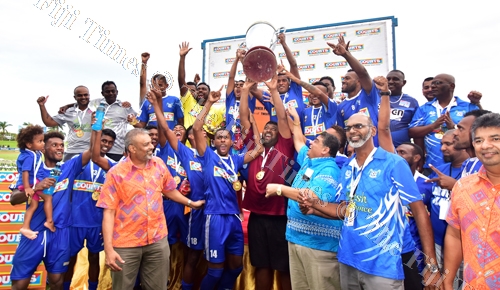 The jubilant Lautoka team with officials of FFA,Courts and Lautoka Football Club with the IDC trophy after beating Suva 1 nil in the Courts 2018 Inter District Championship final at ANZ Stadium. Picture: RAMA/FILE

Totori, who hails from the Solomon Islands, beat two defenders before sending a cross kick to Samuela Nabenia who headed the ball into the net in the second half for the Blues to retain the coveted title.

Totori said the win was for everyone who supported Lautoka and the children of the Lautoka School for Special Education.

“We haven’t won any local tournament this year and we wanted a back to back win and we did it as a team,” Totori said.

“I wanted to score two goals, but we did it as a team. I’m happy for the players and how they defended during the match. For me, I dedicate this to my family because they have sacrificed a lot for me.

“To the people of Lautoka, the win is for you, especially the ones who are in need.”

Totori was instrumental for the Blues throughout the five day by setting up goals and also scored some.

Lautoka coach Kamal Swamy said Totori was a key figure for the team.

“Totori played an important role for the team,” Swamy said.

“When the team is down, he will try to score a goal or two so that he boosts the team spirit into scoring more goals and he has done that in some of the games.”