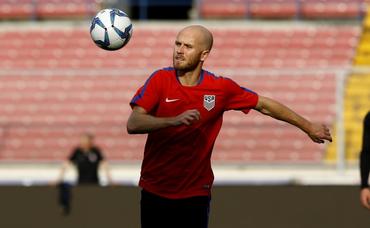 (Reuters) – Toronto FC captain and U.S. men’s national team midfielder Michael Bradley will undergo ankle surgery and could be out for up to four months, the Major League Soccer (MLS) club’s general manager said on Monday.

Bradley, who suffered the injury during his team’s loss to Seattle in the MLS Cup last November, is scheduled to undergo surgery in New York on Tuesday, according to Toronto General Manager Ali Curtis.

Toronto did not previously disclose what Curtis described as a “severe and complicated ankle injury” as the club were hoping Bradley, 32, could avoid surgery and rather rehab the injury.

“He stayed in Toronto for a tremendous part of the off-season and we really tried to work with him on his rehab as much as possible to try to get him to a point where he’s returning to play full strength,” Curtis said in a video posted on the club’s website from their first training session of the season.

“Ankles are finicky. Ankles sometimes tend to take long to recover … You’ve got to be careful with those types of injuries and surgery is the last resort, typically, in terms of what you want to do.”

Curtis said Bradley suffered the injury around the 30-minute mark in a challenge with Seattle’s Roman Torres.

Toronto open their regular season on Feb. 29 and should Bradley be out for the entire four-month period, he would miss the first 14 games of the club’s 34-game regular season.

That timeline wold also rule Bradley out of national team friendlies against Costa Rica on Feb. 1 and versus the Netherlands and Wales on March 26 and 30, respectively.

“For sure we’ll miss him,” said Vanney. “It’ll be time for somebody else to step up and we’ll have an opportunity to fill those shoes. As a group, we have to do it because I don’t think it’s just one guy who’s going to fill it.”