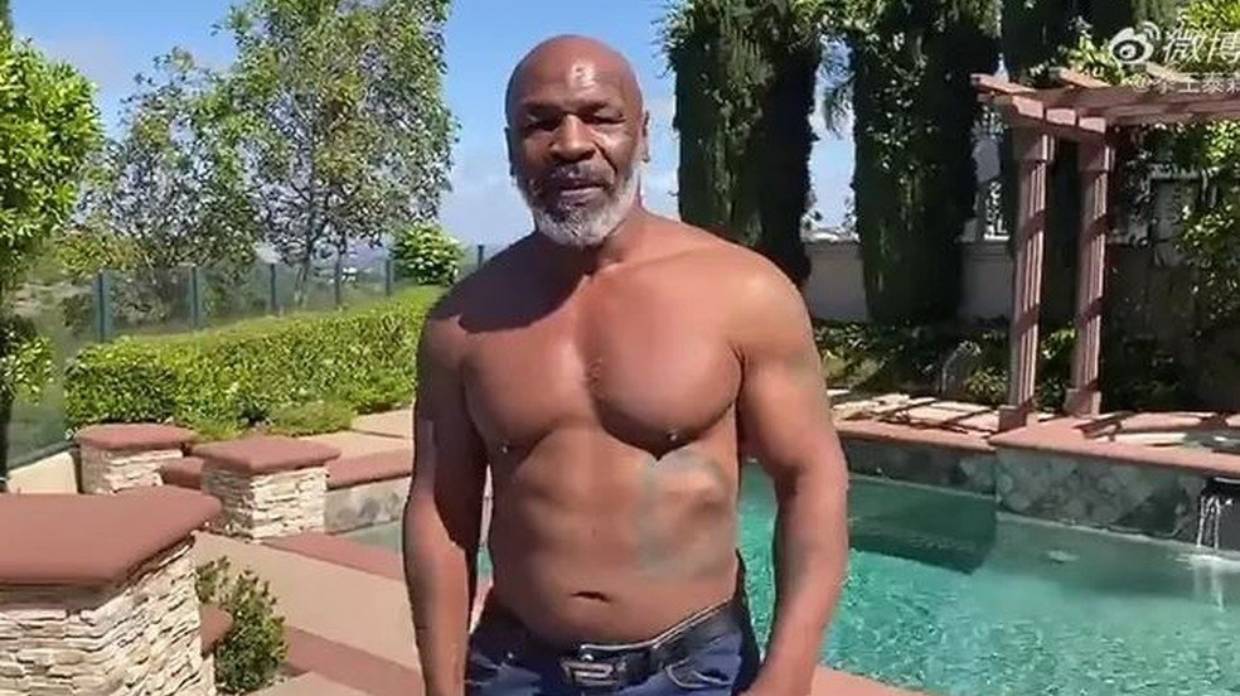 Mike Tyson looks in good shape as he continues to tease about a boxing comeback. Picture: STUFF

A topless Mike Tyson has flaunted his body as the former world heavyweight champion continues to tease about a boxing comeback.

Tyson’s previous training videos have had him in tee-shirts, but he cut an impressive figure as he showed off the benefits of his return to serious training.

Toned arms, a tight chest and the hint of a six-pack stomach were on display as Tyson went through some moves at his Californian property. Only the greying beard was a hint of his true vintage.

“I’ll let you know, there’s a possibility I might come back, but if I do I’m going to fight with the spirit of Mao,” Tyson, who has a portrait of former Chinese leader Mao Tse Tung tattooed on his right shoulder, told his neew Chinese audience.

Tyson has said he wants to do exhibition bouts for charity and there is increasing speculation he could have a trilogy fight with his old rival Evander Holyfield.

While some leading boxing personalities are urging Tyson to stay retired, he has received tentative backing from the World Boxing Council to get back in the ring.

WBC president Mauricio Sulaiman said is organisation would be willing to rank Tyson if he is more serious about his comeback.

“Mike Tyson was the youngest to win a world championship. Maybe he will be the oldest! He’s a tremendous, legendary figure. He’s an icon for the sport, an icon for the WBC,” Sulaiman told Stats Perform News.

“He could knock out anyone with one punch, at any time. So of course we will support him.

“I don’t like to speculate. This is a topic we are all entertained by. An exhibition is one thing; if he comes back he has to be licensed and has to go through a thorough process.

“I’m not going to kill the dream. I’m going to be very supportive of Mike Tyson, he deserves it. If the dream is to say ‘I will be ranked,’ I am saying yes, we will rank him.

“Every world champion has a provision that he can come back, like Sugar Ray [Leonard], who was inactive. But Tyson’s case is different, he’s been away many years.

“But I am in full support of Mike Tyson. I believe this will bring entertainment and he’s doing it for charity. He wants to serve the world in this difficult moment.”

Sulaiman wants more information and said if it was an exhibition, then fight fans should accept it for what it is.

“We need to first understand what it is. I think it’s an exhibition. The safety has to be top priority,” he told Stats Perform News.

“It is great to see athletes promoting the sport. Mike Tyson had a very complicated life in boxing.

“Now to see him losing weight, active, healthy, is great and we have to support him. But we have to see if it is a real fight. I am hearing that it’s an exhibition and we are fully behind him.

“Why not allow them to do something for charity? The only thing we have to be careful about is their safety. Why would we block it otherwise? We offer him our full support.”